Bloody Week In The North-east 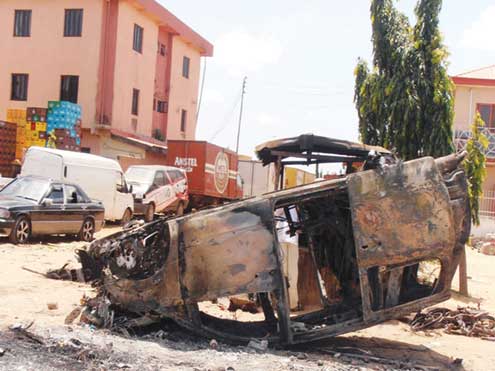 A bombed out car in Damaturu.

Apart from the violence that engulfed parts of Kaduna State last weekend, three other northern Nigerian states were hit in series of bloody attacks launched by the extremist group, Boko Haram

As the country was still reeling from the Sunday bombing of churches in Kaduna State, the Yobe State capital, Damaturu, hours later, came under the siege of the vicious Islamist sect, Boko Haram, which also claimed responsibility for the Kaduna attacks. Men of the Joint Task Force, JTF, and State Security Service, SSS, on Monday night foiled an attempt by the militant sect to seize the Yobe State Government House in Damaturu.

As the battle raged, explosions and sporadic gunshots were heard in the Sabon Fegi area of the city. The military forces had to call for reinforcement from neighbouring Maiduguri, and after several hours of relentless gunfire, the situation was brought under control.

The group reportedly launched the attacks in a bid to free some of its members who were arrested in a recent raid by security forces. A commander of the military task force in Yobe, Colonel Dahiru Abdulsalam, told the AFP the unrest started late Monday after military forces arrested a Boko Haram suspect, prompting other sect members to respond by setting off explosives and shooting indiscriminately.

Several casualties were recorded as the security forces repelled the invaders. Police said, at least, 34 civilians and six security officers were killed in the multiple attacks. Yobe State Police Commissioner, Patrick Egbuniwe said on Wednesday that four of its men and two soldiers were among the dead in the gun battle with the extremists, which began Monday night, but lasted well into Tuesday.

Unofficial sources, however, put the number of the dead at 26, with eyewitnesses claiming scores more bodies littered the streets. A resident claimed he counted more than 10 bodies on the streets. Another said he saw many bodies being ferried to the General Hospital, Damaturu. The death toll was expected to rise as rescuers continued the search for the wounded and the dead last Wednesday.

By last Wednesday, the city had been deserted, with many residents trapped indoors and businesses shut, hours after the state government restricted movement to prevent the violence from festering. Many residents complained of running out of basic supplies and medicine to treat minor ailments.

“We should be giving the children antibiotics but we are just boiling the water, especially for the baby,” a 41-year-old father of two, Abdul-Malik, who said his family had stopped taking baths in order to have more water to drink, told the Associated Press, AP.

Later, in a state-wide announcement, the Yobe government asked residents to disregard a false text message going round which was aimed at inciting violence among different religious groups, describing it as “mischievous”.

The latest hit on Damaturu brings memories of a bloodier attack launched on the north-eastern city last year November by the Boko Haram sect. A series of coordinated bomb and gun attacks, on 4 November 2011, killed more than 100 people and injured hundreds more. The bombs hit several targets, including churches and the headquarters of the Yobe State Police Command.

Last week, skirmishes were also recorded in the same north-eastern states of Gombe and Borno. Military forces clashed with the sect members in Borno’s capital, Maiduguri, the group’s spiritual home, which is about 130 kilometres east of Damaturu. The Maiduguri attack resulted in an unconfirmed number of casualties and many injured. In a separate incident in Gombe, suspected Boko Haram members reportedly killed a security detail attached to Governor Ibrahim Dankwambo of Gombe State.

Boko Haram, which wants a stricter form of Sharia law imposed in all of northern Nigeria, has killed more than 1000 souls since launching a campaign of violence in mid-2009. According to an AP count, more than 580 people have been killed in violence blamed on the sect this year alone, with the sect’s leaders promising “more attacks”.