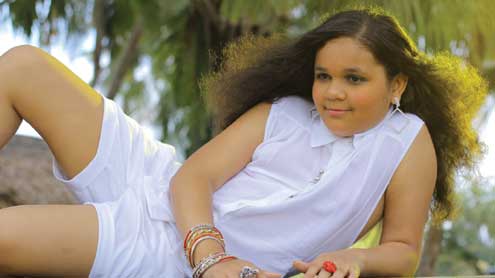 How do you often feel when you see a Nigerian child slaving away their innocence for parents who have become experts in child abuse? While many would rather trade blames and derail from the path of realistic solutions, Mya K, a 10-year-old artiste with a deep-seated passion for what she does has arrived with a light of hope that will not only inspire children but parents and guardians.

So far, Mya K now has three music videos (I’ll Survive, Christmas Charity and Superstar) to her credit and has continued to grow in leaps and bounds.

Mya K’s musical career began at a very early stage of her life and under the watchful eyes of her father, a British painter, Timothy Kinlock and a Nigerian mother, Victoria Kinlock, a Nigerian-based industrialist.

Mya K joined HJA in April 2010 initially to study singing and since then her repertoire of studies has expanded to include tap and Street dance, ballet, Contemporary/Dance Alive and Drama. In her short career with HJA, she enjoyed much success.

Mya K is now venturing into her solo career at a tender age of 10.