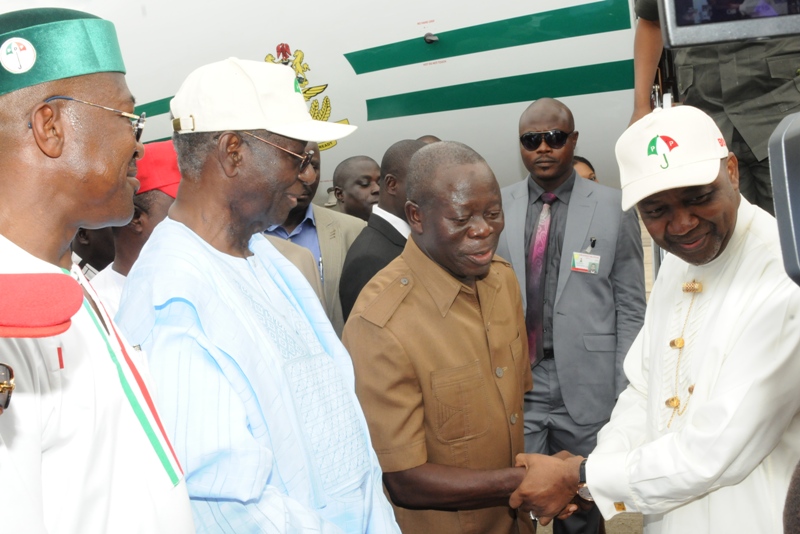 A suspicious car accident involving a governor’s convoy and the murder of one of his top aides leads to accusations against an elderly political “godfather”.

It sounds like the plot of a thriller from Nigeria’s prolific Nollywood movie industry — but it is in fact the bare-knuckled reality of politics in the country’s Edo state, which holds governorship elections on July 14.

Africa’s most populous nation has been struggling to entrench credible democracy after years of military rule and sham votes, and 2011 presidential polls were seen as its fairest in nearly two decades despite major problems.

But as the Edo campaign has shown, elections can still be all-or-nothing affairs in the continent’s largest oil producer, where the spoils of office often include control over vast patronage networks.

The violence “is not particular to Edo state…It is symptomatic of politics in Nigeria,” said Asomwan Sonnie Adagbonyin, a political analyst and professor at the Ambrose Ali University outside the state capital Benin City.

“There is this feeling in Nigeria that if you really want to battle, it is a fight to the finish.”

The fertile southern state that produces relatively small amounts of oil, its eastern border aligned with the Niger River, is now girding for the vote as accusations and counter-accusations thunder on.

While it has been occasionally hit by gang violence, Edo has not been affected by Islamist group Boko Haram’s insurgency concentrated in Nigeria’s north.

Neither the car accident nor the murder have been proven to be politically connected but Governor Adams Oshiomhole, who sometimes wears a Fidel Castro-esque patrol cap and whom many call “Comrade”, accuses his political opponents of being behind both.

The state is run by an opposition party aligned with organised labour, and Oshiomhole alleges that Nigeria’s ruling Peoples Democratic Party will do anything to take the state back.

The PDP rejects the charges and has warned the governor, who represents the Action Congress of Nigeria party, against making such inflammatory allegations weeks before a closely fought vote.

Amid the intrigue is a man the governor calls “Mr. Fix It,” a senior PDP official who Oshiomhole claims wants to “remove me from office by whatever means”.

Others call the man, Tony Anenih, a “godfather” — a common term for behind-the-scenes political kingmakers in Nigeria.

He characterised the governor, who ousted the PDP from power in 2008 when a court overturned vote results after alleged irregularities, as “dictatorial,” “the embodiment of hypocrisy” and a “rascal”. He also accuses Oshiomhole of corruption.

But the governor’s most egregious offence, according to the spokesman, was accusing the PDP of assassinating Olaitan Oyerinde, the 43-year-old aide and father of four children.

“We have nothing to do with Olaitan … but, Comrade already overran his mouth by saying the party did it, so now he must substantiate it,” Urhoghide said.

Six days before the murder in May of the governor’s private secretary, the car in which the governor’s staff says Oshiomhole normally rides was struck by an oncoming vehicle. Three journalists were killed in the accident.

He was in another car in the convoy and “narrowly escaped death,” said the governor’s spokesman Louis Odion, who also claimed that hours after the crash, his own home was invaded by unknown gunmen.

According to Odion, he could have been the first of the governor’s aides to be executed, but was sleeping elsewhere that night.

Regarding the murder of Oyerinde, the state police commissioner, Olayinka Balogun, told AFP that a special unit of investigators has taken over the probe because of “the sensitivity of the case,” and declined to comment further.

Anenih sits on the PDP’s national board of trustees, and the governor and his allies argue that to retain his standing with Nigeria’s top leaders, including President Goodluck Jonathan, he must deliver a win.

“His life depends on this election,” Odion said.

Anenih has stayed quiet to avoid responding to Oshiomohole’s “trivialities,” Urhoghide said. Calls and messages to a number said to be Anenih’s went unanswered.

Urhoghide said the PDP, including governorship candidate Charles Airhiavbere, are concerned by the unsolved murder and have warned the governor to proceed “gently” given the combustible political climate.