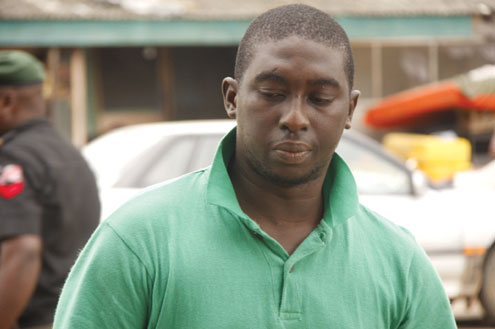 The trial of Akolade Arowolo, accused of murdering his banker wife, Titilayo, was again stalled on Thursday as a result of his ill-heath.

Arowolo, 31, had on Tuesday slumped inside the dock of an Ikeja High Court in Lagos, during his trial and the case was adjourned till June 28.

The News Agency of Nigeria (NAN) reports that at the resume hearing on Thursday, the accused was unable to enter the dock due to his poor health.

The accused, who arrived at the court room at about 8.45 a.m. with the assistance of a male prison official, sat in the gallery with his head resting on a chair.

His lawyer, Mr. Olanrewaju Ajanaku, told the court that the accused was “critically ill” and could not withstand the rigours of trial.

“I am craving the indulgence of the court for an adjournment due to the fact that the accused is critically ill and unable to withstand the rigours of trial.

“I have met with the prosecution to inform them that the accused is still not feeling fine and that the matter will not go on,” Ajanaku said.

Justice Lateefat Okunnu advised the counsel to ensure that Arowolo was given proper medical attention and adjourned the case till September 14 for continuation of trial.

Arowolo is standing trial for allegedly stabbing his wife, Titilayo, to death on June 24, 2011 at their residence located at 8, Akindeinde St., Isolo, Lagos.

He had pleaded not guilty to a one-count charge of murder and was remanded in Ikoyi Prisons.