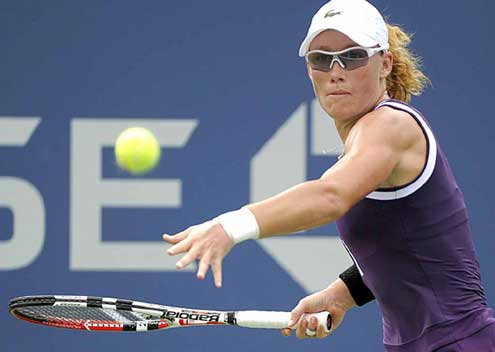 Samantha Stosur insists there is no need to panic about the state of Australian tennis after her shock Wimbledon exit completed a woeful effort from her compatriots at the All England Club.

Stosur failed to keep the Australian flag flying into the third round of the grasscourt Grand Slam as she slumped to a 6-2, 0-6, 6-4 defeat against Arantxa Rus of the Netherlands on Wednesday.

The US Open champion’s latest Wimbledon nightmare — she has failed to get past the third round in 10 visits — means there are no Australians left in either the men’s or women’s singles.

Lleyton Hewitt, Bernard Tomic, Matthew Ebden and Marinko Matosevic had already bowed out, which left Australia without a male player in the second round of Wimbledon for the first time since 1938.

And with Stosur, Casey Dellacqua, Ashleigh Barty, Anastasia Rodionova and Jarmila Gajdosova all eliminated from the women’s draw, some critics have begun to question the strength of Australia’s tennis.

Stosur, who reached the French Open semifinals earlier this month, concedes it has been a dispiriting effort from the Australians, but she is adamant talk of a crisis is premature.

“It’s obviously a pretty woeful performance by all of us, but it’s not through lack of trying or not wanting to be here. It’s just one of those things,” she said.

“You have to look at something over a longer period of time than just one event before you say we’re in this dire straits kind of mode.

“Of course it can be better. I’m sure I can speak for all the other players when I say we wish we had better tournaments.

“But I don’t think you can look at something from one tournament and say ‘Oh my God, we have to change everything’. There’s definitely players coming up.

“Sometimes you have to stick to a plan for a long period, even if you see a few lulls, to see if it’s really working.

“If you chop and change and are always looking for that secret answer you’re not necessarily going to find it. Things just take time.”