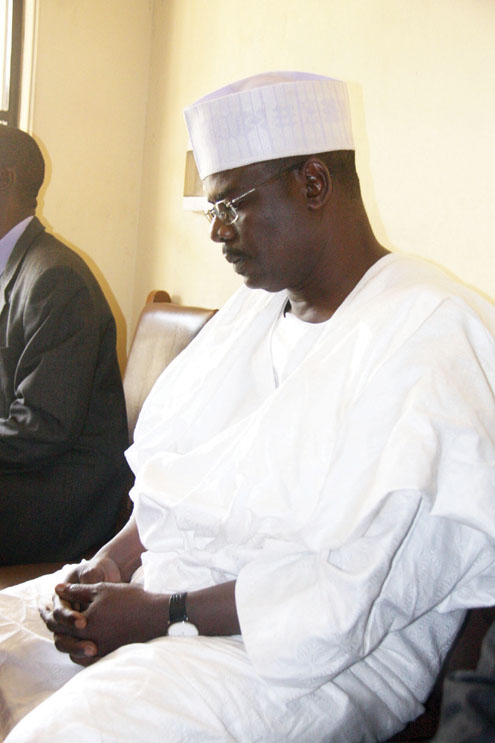 Trial of Senator Aliyu Mohammed Ndume on the charge of terrorism financing finally took off on Tuesday before a Federal High Court siting in Abuja.

The trial which suffered series of delays since the senator was first arraigned last December commenced with the prosecution team led by Mrs. I. I. Idera, calling its first witness in the matter.

The witness, Mr. Abdulkareem Farouk Dauda, a security investigator with the State Security Service, SSS, told the court how the embattled senator was invited to the Headquarters of the security agency following the mentioning of his name by a suspected terrorist, Umar Ali Konduga, during investigations and how he was directed by his superior officer, Mr. James Eneh Izi, on the 21st of November, 2011, to interview and take the senator’s statement.

During cross examination of the witness, Senator Ndume’s lawyer, Mr. Rickey Tarfa, a senior advocate of Nigeria, attempted to cast doubts on the qualification and competence of the witness to handle terrorism related matter but the attempt hit a brick wall as the witness reeled out specific terrorism related training courses he had attended since his graduation from the Ahmadu Bello University, Zaria , both within and outside the country which were conducted by both the American CIA, British MI5 and MI6 as well as the SSS.

On his membership of the Special Investigative Panel formed in the SSS in the wake of the terrorist acts of the dreaded Boko Haram sect, the witness told the court that he was conscripted into the panel upon his completion of a course in Arabic Language at the Nigerian Army School of Education in Ilorin, the Kwara state Capital. He told the court that he was deployed to team D composed of four officers of the agency.

Rickey Tarfa sought to know if the team investigated the contents of the senator’s statements to ascertain their veracity or otherwise but the witness stated that it was not his part of his schedule to investigate such and that it was the duty of the Service to do so and that information regarding operations in the Service are strictly on the need – to -know basis.

Ndume had alleged in his statements that he handed over some materials he obtained in the course of his job as a member of the Presidential Task Force on Insecurity in the North East to both the Vice President, Namadi Sambo as well as to the Director General of the SSS, Mr. Ita Ekpeyong.

Rickey Tarfa sought to know if the Investigative panel conducted an investigation into that allegation to ascertain whether indeed the embattled senator did so but the witness insisted that he had no knowledge of such.

The defence counsel also wanted to know whether it was only his client’s name that was mentioned by Umar Ali Konduga and why others were not also on trial. The witness told the court that the senator and one other person were named by Konduga but that the other person is now deceased.

Upon the completion of the cross examination, the presiding judge, Justice Gabriel Kolawole, adjourned further proceeding to Tuesday 10th July.

Former spokesman of the sect, Kunduga, who implicated the senator had admitted his culpability and was subsequently sentenced to a three year jail term by an Abuja Chief Magistrate Court.

Ndume, however, denied any involvement with the group in spite of records of telephone communication which the State Security Service claims linked him to the group.

Senator Ndume was slammed with a four-count charge by the State Security Services, SSS, wherein he was alleged to have been in possession of a telephone number which he knows to be important to law enforcement officials in the unraveling of the persons behind the Boko Haram menace, but did not oblige same to law enforcement agencies, an offence contrary to the provisions of Section 7 (1) of the Terrorism Prevention Act.

He is also alleged to have run foul of Section 3(b) of the Act for being the possessor and operator of a phone number which provided logistics and phone numbers of government officials, including those of the Attorney General of the Federation and Minister of Justice, Mohammed Bello Adoke, to Kunduga, former spokesman of the dreaded Boko Haram Sect.

Ndume was also alleged to have received information from Kunduga regarding planned terrorist attacks on members of the Borno state Election Petition Tribunal judges but failed to disclose such to law enforcement agencies as well as rendering support to acts of terrorism through the provision of information to the sect through Kunduga.