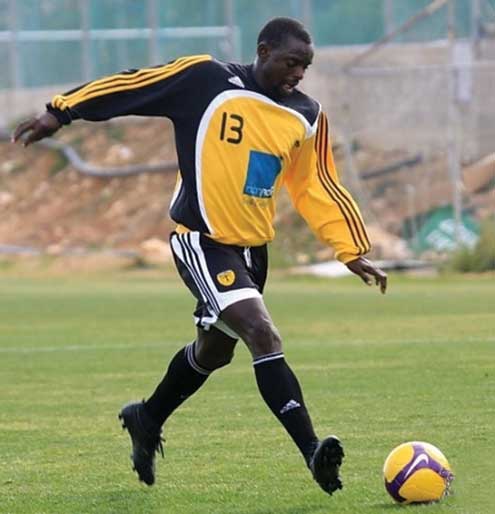 Otegheri in action during his trial for Beitar Jerusalem.

Three-time capped Super Eagles player and former Heartland of Owerri, Igho Otegheri has explained why he returned to Nigeria from Israel.

Otegheri joined Beitar Jerusalem F.C of Israel, but shortly after he suffered a career threatening injury, he was operated upon and is currently undergoing his rehabilitation in Nigeria.

The former Wikki Tourists player disclosed to P.M.Sports in Calabar, Cross River State recently that his club told him to continue with his rehabilitation, after which he could rejoin them.

Commenting between the Nigeria Premier League, NPL where he once played and the Israeli League, the player said there is a big difference, stating that there is always room for improvement.

The former Rangers star tasked the Nigeria Football Federation, NFF to take the welfare of players seriously, arguing that Nigerian players are badly treated by club owners in Nigeria.

“Some clubs are fond of owing players for months here, it is not done anywhere in the world, the NFF and the NPL must work hard on that if they want to develop the Nigeria Premier League”.