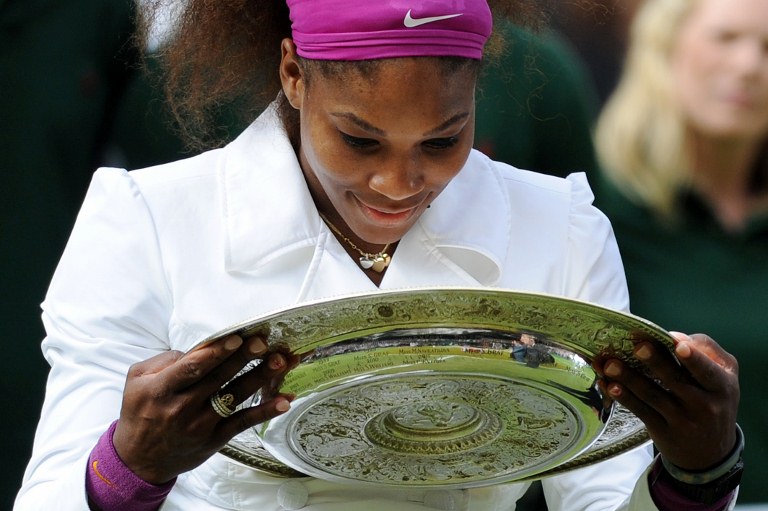 Serena Williams was crowned Wimbledon champion for the fifth time on Saturday as the American subdued a brave fightback from Polish third seed Agnieszka Radwanska to win 6-1, 5-7, 6-2 in a dramatic final.

Serena, who pockets a cheque for £1.15 milllion ($1.78 million), is the first woman over 30 to win Wimbledon since Martina Navratilova in 1990 and she needed all the experience gathered over her illustrious career to survive a remarkable revival from Radwanska.

After being completely out-classed for the first set and a half of her maiden Grand Slam final, Radwanska had Serena on the ropes before the sixth seed finally recovered her composure to reclaim the Venus Rosewater Dish in just over two hours on Centre Court.

Williams has now equalled her sister Venus’s tally of five titles at the All England Club, but more significantly the 30-year-old’s 14th Grand Slam crown is her first at the majors since her last Wimbledon triumph in 2010.

Inspired by the painful memory of her shock French Open first round exit against Virginie Razzano last month, Serena has spent the last month in a determined bid to reestablish her primacy. It is mission accomplished, but only just.

Radwanska had been so severely affected by an upper respiratory illness over the last few days that she withdrew from the doubles and cancelled her pre-match media commitments.

The 23-year-old, the first Pole to reach a Grand Slam final for 73 years, recovered sufficiently to play, but she might have wished she was back in her sick bed in the first set.

Serena’s success has its foundations in a serve so powerful and accurate that John McEnroe describes it as the greatest the women’s game has ever seen.

Williams has backed up McEnroe’s view throughout this year’s Wimbledon, hammering down hammering down 24 aces in her semi-final win over Azarenka to break the record of 23 she set earlier in the tournament.

She was quickly back in the groove in the final and bludgeoned the first of 17 aces — taking her final tally for the tournament to a remarkable 102 — to clinch the opening game.

Serena was equally powerful with her groundstrokes and converted her third break point for a 2-0 lead.

She broke again in the fourth game and, although sympathetic cheers echoed around Centre Court when Radwanska finally got on the scoreboard, it wasn’t long before Williams closed out the set in just 36 minutes.

After looking out of sorts in the first set, a brief rain delay offered Radwanska a chance to regroup, yet it seemed any hopes of a revival had been snuffed out when Serena broke to love in the third game of the second set.

But to her credit Radwanska kept fighting and, finally unfurling the subtle shots which have proved so effective over the last fortnight, she converted her first break point to level in the eighth game.

Serena looked vexed by the Pole’s changes of pace and nerves seemed to get the better of her as she surrendered the set with a succession of errors at 5-6.

On cruise control for so long, Williams was now being forced to battle for every point.

She thumped down four successive aces to hold serve and stepped up the power to land the decisive break for a 3-2 lead.

When she bagged another break with a delicate drop-shot, Serena celebrated as though the title was hers.

Moments later it was and she was soon clambering into the players’ box to celebrate with Venus and the rest of her family.

It was Williams’ 14th Grand Slam singles crown and allowed Victoria Azarenka, who she defeated in the semi-finals, to reclaim the world number one spot.

It was not only the title she got at Wimbledon. She also set a record for serving the greatest number of aces.

She surpassed the 100 aces mark on Saturday, making her the biggest server of aces in both the men’s and women’s tournaments this year.

The American reached the landmark in the fourth game of the third set of the final against Agnieszka Radwanska when she served four in a row for a ‘golden game’.

Williams had stood at 85 aces going into the final and she has now surpassed even Germany’s Philipp Kohlschreiber who ended his campaign on 98.