Oshiomhole: Why I seek re-election as Governor 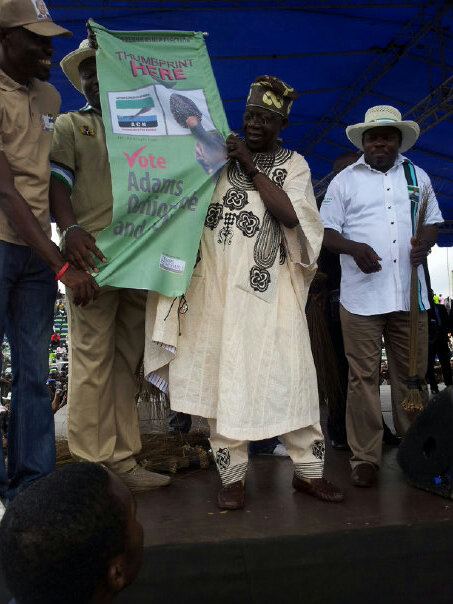 Governor Adams Oshiomhole of Edo state has said in Benin that he was seeking re-election as governor of the state in the 14 July governorship election to enable him complete the various ongoing projects in the state.

Oshiomhole, a former labour leader, who is contesting the governorship election on the platform of Action Congress of Nigeria (ACN), made this explanation during a grand rally to round off his campaign for the election.

“We are seeking your mandate to remain in office to completely restore the lost glory of Edo state. We have constructed roads with street light, we have provided water for the people, and we have built schools. Our children no longer seat on the bare floor in classrooms without roofs. We do not want these projects to be abandoned,” Oshiomhole said.

Oshiomhole who said in less than four years of his government, Edo state is now working again, said his administration has scored high marks in the building of roads with street lights, building of schools, provision of water and other infrastructural development.

According to him, Nigeria continues in abject poverty as a result of bad leadrship, adding that “Nigeria has the money to meet all the needs of Nigerians, but Nigeria does not have enough money to meet the needs of politicians who feed on the resources the nation.”

Former governor of Edo state, Chief John Odigie Oyegun who recently dumped ANPP for ACN, said the 14 July election will only be a referendum by the people of the state to affirm their collective wish for good governance.

Notwithstanding promises of fair, free and credible election by the Presidency and security agencies, Oyegun said: “We are prepared for all eventualities. Be prepared to come out to vote and be prepared to defend your votes.”

Former governor of Anambra state, Senator Chris Ngigie whyo was also present at the rally said Oshiomhole has transformed Edo state from an ancient to a modern city.

“Today, no more floods in Benin City and no more sharing of the money. This is the time to vote for the future of your children,” he said just as he called on Edo students to use their votes to give an answer to PDP candidate, Charles Airhiavbere who called them criminals at a political debate.

Also present was Lagos state governor, Babatunde Fashola who said the 14 July governorship election was a good opportunity for the people of Edo state to renew the social contract they signed four years ago, which he said was now working for them.

Other ACN governors present at the rally were Kayode Fayemi of Ekiti state, Ibikunle Amosun of Ogun state and Rauf Aregbesola of Osun state who called on voters from 35 years and above to wait behind at the polling centres to defend their votes by ensuring that the votes are counted, recorded and collated results sent to appropriate centres for transmission to INEC.