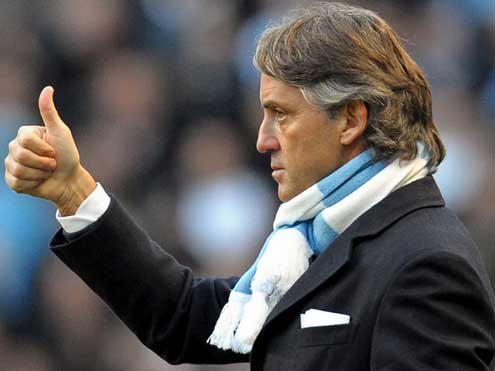 Roberto Mancini’s new £37.5million contract makes him British football’s highest-paid boss but fall short of Real Madrid coach, Jose Mourinho, who is the highest paid football coach in the world with his £11.8million (about 14 million euros) a year wages.

The Sun of London reports that the Manchester City chief ended speculation about his future last night, despite a £6.5million-a-year approach from the Russian FA.

He said: “I’m very much looking forward to the challenges and excitement ahead. The opportunity that exists to build on our recent success is huge.”

The Russians wanted the 47-year-old Italian to take over from Dick Advocaat and steer their national team towards the 2018 World Cup, which they will host.

But SunSport revealed on Sunday that Mancini was ready to pledge his future to the Premier League champions.

And his mega £7.5million-a-year deal, which ties him to City until 2017, takes him way above Manchester United boss, Alex Ferguson, in the pay league.

But Mancini’s new contract recognises his achievement of guiding City to their first title in 44 years last season.

Mancini added: “I’m delighted to be able to give my all to City for a further five years.

“This is a fantastic club from the owner, chairman, board and executive team through to the players, staff and fans.”

The news that Mancini is staying will come as a huge relief to City supporters, who have taken him to their hearts.

He ended the club’s 35-year wait for silverware with last year’s FA Cup triumph, and followed it up by winning the Premier League on the final day 12 months later.

Mancini had been about to enter the last year of the deal he signed when he succeeded Mark Hughes in December 2009.