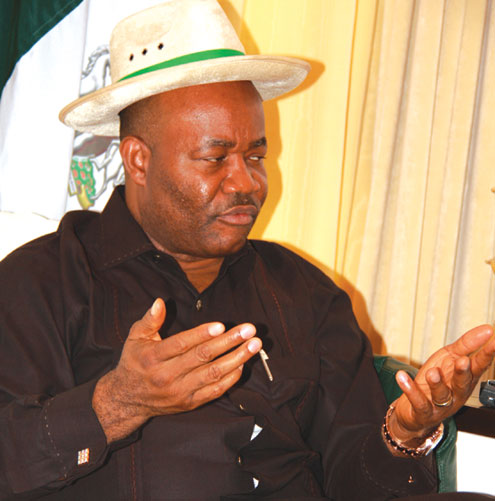 The legal battle for the ownership of 76 oil wells located in the Atlantic Ocean between Akwa Ibom and Cross River state was on Tuesday resolved by the Supreme Court in favour of the Akwa Ibom state government.

The court in a unanimous decision held that the claims of ownership of the disputed oil wells by Cross River state was lacking in merit and substance.

The court maintained that the ceding of the Bakassi Peninsula to Cameroun by the government of former President Olusegun Obasanjo terminated the access of Cross River to the Atlantic and went ahead to hold that the maritime territory where the disputed oil wells were located belong to Akwa Ibom State.

The court ordered that Akwa Ibom state should continue to enjoy the benefits accruing from the oil wells as determined by the National Boundary Commission and the Revenue Mobilization and Fiscal Allocation Committee.

Cross River state attempted to arrest the delivery of the judgment as lawyers representing the state and led by Mr. Paul Erokoro, a senior advocate of Nigeria, tried unsuccessfully to force the court to hear the pending application filed on behalf of the state where it alleged that the map used in the trial as submitted by former Attorney General and Minister of Justice, Chief Bayo Ojo, SAN, was erroneous and falsified.

Erokoro posited that their application raised grievous issues on the matter and urged the court to hear the application.

The apex court panel presided over by Justice Mahmud Mohammed declined to hear the application, noting that what the court fixed for today was the delivery of the judgment.

According to Justice Mahmud, “We can’t look at that application today, the panel that heard this matter had completed their job and a fresh panel would have to be constituted to hear your application at a different time. For today, we are going ahead with the delivery of the judgment. Please bear with us, you are not without a remedy.”

The court held that Cross River state is no long a littoral state following the ceding of Bakassi to Cameroun.

It also noted that the decision of the court had nothing to do with Nigeria’s international boundaries but with ownership of the oil wells located in the maritime boundary of Akwa Ibom state.

In his reaction to the judgement, Cross River Governor, Liyel Imoke said the judgement fell short of his expectation and that of the people of the state and accordingly declared that the struggle for justice is far from over.

In a broadcast to the people of the state, Senator Imoke said the judgment marks a watershed in the state’s struggle for justice and burning “desire to be treated as equal members of this great union deserving of fairness and equity with our brothers across the country.”

Making reference to the words of Dr. Martin Luther King Junior that “the arm of the moral universe still bends towards justice,” Imoke said that though this has been denied by the Supreme Court, the people should take solace in the maxim that “justice can only be delayed and not denied”.

Reflecting on what led the state to seek justice from the Supreme Court, the governor said four years ago when a “miscarriage of justice robbed our state of 76 oil wells and handed them over to neighboring Akwa Ibom State, the good people of Cross River State did what we have always been known for; we preferred peace over violence.

“We maintained our peace and dignity even in the face of what could easily have provoked unprecedented violence and reprisals. We hoped for justice from the highest court in the land. But our hope was dashed.”

He maintained that the Supreme Court’s decision would not deter or break “our spirit.”