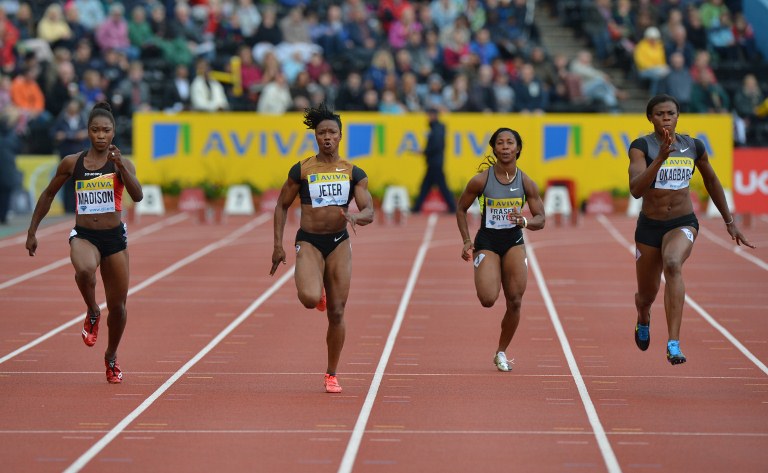 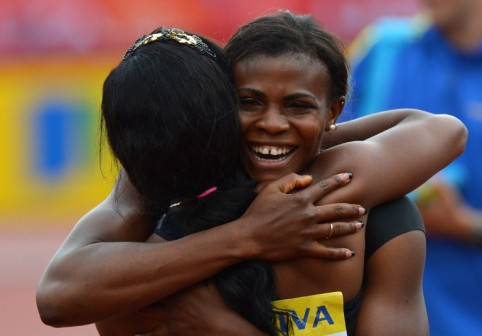 Fraser-Pryce, the fastest woman in the world this year, never recovered her composure after stumbling after leaving the blocks and appeared to ease up half way through the race rather than chase a lost cause.

Okagbare, who had earlier dipped under 11 seconds in the heats, then held off the strong finishing American Jeter to cross in 11.01sec, with Jeter finishing in 11.03 and Tianna Madison third in 11.13sec.

It was not the only upset of the day.

Olympic favourite Pearson, the 2011 world championship gold medallist, was beaten in the 100m hurdles for only the second time in 34 races as American Kellie Wells stormed home in 12.57secs.

“I’m feeling really good,” said Wells. “It’s not about racing, it’s about executing — I know that if I execute I’m going to be hard to beat,” the 29-year-old added.

Pearson, the fastest woman in the world this year after clocking 12.40sec in Paris earlier this month, finished second in 12.59sec with American Virginia Crawford third in 12.74sec.

The event had earlier seen a tearful exit from controversial British sprinter Tiffany Porter, with the American-born athlete finishing last in her heat citing an unspecified fitness problem.

The final event of the day saw Britain’s defending Olympic 400m champion Christine Ohuruogu indicate she is hitting form at the right time with victory over reigning world champion Amantle Montsho of Botswana.

Ohuruogo overhauled Montsho in the final few metres of a race held in torrential rain with a season’s best of 50.42 sec. Montsho finished in 50.56sec with Rosemarie Whyte of Jamaica third.

Elsewhere Saturday, Frenchman Christophe Lemaitre produced a superb display to take the 200m with the third fastest time in the world this year of 19.91sec.

Lemaitre fought off a strong challenge from the Netherlands’ Churandy Martina down the home straight with Marvin Anderson of Jamaica in third.

“I’m very happy — I knew I could run under 20 seconds but to do that here is very good, two weeks before the Olympic Games. Now I’m very confident over this distance,” a satisfied Lemaitre said afterwards.

Reigning 400m world champion Kirani James signalled a return to form with a confident victory after a season which has seen the 19-year-old from Grenada keep a low profile.

James, who had only appeared at three outdoor meetings in 2012 prior to his appearance in London, timed his run to perfection to cross in 44.85sec, ahead of the Bahamas Chris Brown in 44.95sec and Tony McQuay of the United States, 45sec.

Although James’ winning time was way off Olympic champion LaShawn Merritt’s season best of 44.12sec, the teenager is happy with his preparations heading into the Olympics.

“I’m just happy to be competing,” he said. “I’m getting ready for the big one. I just want to stay injury free, stay fresh as possible.

“I’m getting used to the environment and the weather. Ready for the big one.”

Poland’s Adam Kszczot won the 800m, although his time of 1:44.49 will not alarm the absent David Rudisha of Kenya, the world record holder and reigning world champion who will start as the favourite at the London Olympics.