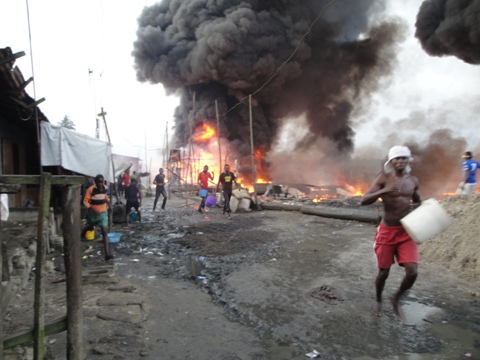 Three persons, an elderly woman and two girls, died when at least 1,000 residents of Elechi Beach Waterfront, in Port Harcourt, the Rivers State capital, were today rendered homeless and properties worth millions of naira destroyed by a Military Joint Taskforce.

The taskforce raided the area in the early hours of today and set the illegal bunkering site ablaze.

As the fire raged, the residents of the area were seen trying to salvage their property from the inferno.

They rained expletives on Governor Chibuike Amaechi of Rivers State and the Nigerian Army for rendering them homeless.

They said that crime reduced in the state because they preoccupied themselves with stealing Nigeria’s crude oil.

A youth said: “Amaechi wants to drive us into robbery. We are now homeless and our business destroyed.”

They were so enraged that they transferred their aggression on journalists who were early callers at the area.

Muritala Bamidele, a reporter with SilverBird Rhythm 93.7 Port Harcourt, was mistaken for an official of the Rivers State government and was severely beaten by the angry youths.

“You are Amaechi’s people who have come to destroy our lives and our means of livelihood,” one the youths screamed. While some hit him with whatever they could lay their hands on, others lifted him off his feet and wanted to hurl him inside the inferno.

It took the pleas of fellow journalists and other residents who Bamidele had earlier interviewed that he was not a government official but a journalist who had come to report their plight before they set him free.

After the attack, Bamidele told P.M.NEWS that his Sony Digital camera, his Nokia phones earlier confiscated were returned to him but destroyed.

A combined team of soldiers and policemen had earlier raided the area between 2 a.m. and 4 a.m., combing it for illegal oil thieves and exact location of illegal bunkering sites before setting ablaze their operational equipment and makeshift houses as part of its operation to wipe out stealing of Nigeria’s crude oil and petroleum products.

The Elechi beach waterfront is one of the over 44 waterfront settlements in Port Harcourt, which Rivers Governor, Rotimi Amaechi, described as dens of criminals, which must all be demolished, as part of his administration’s urban renewal programmes.

Njemanze waterfront in Mile One, Diobu was demolished in 2009, rendering over 20,000 residents homeless. Development is yet to start in the area.

Recently, armed robbers and kidnappers converted the demolished site close to Silverbird Cinema Galleria to a safe haven for kidnapping and robbing of innocent persons.

The nearby Abonnema Wharf waterfront was demolished about three weeks ago, attracting criticism of the government by Amnesty International.