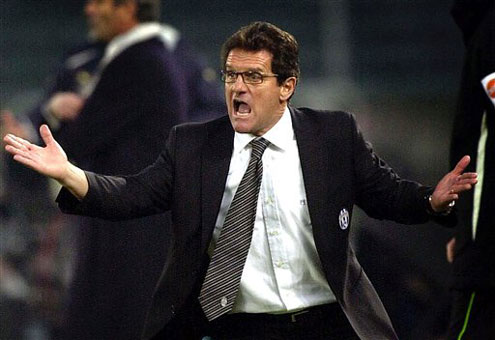 “We have decided to name Fabio Capello as the new manager of our national team,” Russian Football Federation vice-president Nikita Simonyan was quoted as saying.
“We await Capello in Moscow over the next few days for the final details and the signing of the contract.”

Capello, 66, quit as England boss in February. He will replace Dutchman Dick Advocaat who left to take charge of PSV Eindhoven after Euro 2012.

Capello said he was happy and proud to take over Russia’s national side.

“And I’ll be happy if my work with the Russian team will go right way. The co-operation with this team is a great challenge for me as Russia is a great country.”

Financial details have not been disclosed but the Sport Express daily reported last week that Capello had been offered an annual salary of up to seven million euros ($8.5 million).

The 66-year-old Capello will be the immediate successor to Dutchman Dick Advocaat whose side were disappointingly knocked out of the Euro 2012 in Poland and Ukraine at the group stages.

Russia’s failure to qualify out of arguably the event’s weakest group despite being packed with highly-rated players such as Andrei Arshavin and Alan Dzagoev left the team a tough challenge to make the 2014 World Cup finals in Brazil.

Under Capello, England qualified for Euro 2012 before the Italian resigned after falling out with Football Association chiefs after he stood by John Terry as skipper despite the Chelsea man being embroiled in a racism trial which ultimately saw the defender acquitted.

The list also contained the names of seven Russian coaches but also Capello, who in the end appeared to be the only serious candidate. Why the RFU felt the need to publish its wish-list has never been explained.

Last Thursday Capello came to Moscow to hold talks with RFU and his arrival caused an immediate sensation in the Russian media.

However, the Italian travelled to Moscow in a hurry and was reportedly forced to wait in the airport for several hours while RFU officials finalised visa entry formalities.

After their meeting, Russian football officials expressed confidence they could agree terms with one of the biggest coaching names in the sport.

“Capello is ready to work conscientiously and live here in Russia,” Simonyan was quoted as saying by the local media. “He did not make any extraordinary demands.”

“Capello is one of the world’s strongest coaches,” he said. “His skills, experience and achievements make him number one in the world. His work here it will do Russian football good. He is able to make our football more attractive.”

“He will need assistans who knows our football well and will be able to initiate changes in our national team.”

One of the Italian manager’s key conditions was reportedly having Italian-speaking Russian assistant coaches in his squad.

Igor Shalimov and Dmitry Alenichev, who have experience playing with Italian Serie A clubs and both speak the language, are top contenders to join Capello’s coaching team, Sport Express said.