Goldie Booted Out Of Big Brother 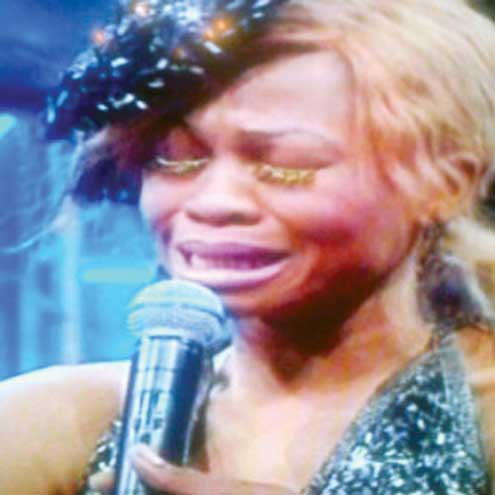 Weeping Goldie after her eviction from the Big Brother Star game last night.

After a 70-day run, Nigeria’s rising singer and representative at the ongoing Big Brother StarGame reality TV show, Goldie Harvey, was voted out of the show last night.

She failed to beat off stiff competition from Kyle and Lady May.

The 28-year old singer, who received the lowest vote, could not control her emotions after realising that her quest for the $300,000 had come to an end.

During the Live Eviction show inside Sasani Studios in Johannesburg, South Africa, show host, IK, first broke the good news to Lady May and Kyle that they had been saved by Africa, then he told Goldie that she had become the latest eviction from the house.

And as expected, she bawled on stage, after seeing a video of the people who had nominated her.

Show host, IK, tried to comfort her that she had been an amazing woman in the house, but those words could not soothe her, as angry and disappointed Goldie shed to tears during the live show.

She  had the most emotional stay in the House, all thanks to her tumultuous relationship with the Masai warrior, Prezzo.  The tension in the house before the big reveal was palpable. Yesterday, the ‘two lovers’ stood as far apart from each other as they could and when it was announced Goldie would be leaving, the Nigerian housemate simply walked out.

Prezzo then followed her to the big eviction doors and had one final conversation. “I’m sorry about our earlier issues. Can I get a hug?” Goldie seemed to mull over her decision for a bit, but then relented. She walked away, and shunned a hug request from her ‘boyfriend’.

In the days leading to her eviction, Goldie had gone teary and after a horrible fight with Prezzo yesterday afternoon, Goldie told Big Brother she does not want to spend the last three hours of her stay in the House, fighting with the love of her life.

“I would have wanted it to be different. I don’t think I will make it. I pray I do, but for some reasons, I know I won’t make it,” dejected Goldie said earlier.

There had been a fight between them over a missing ring, which Goldie claimed belong to her grandmother.

Meanwhile, shortly after Goldie’s eviction, quite a number of fans had taken to the social media to express mixed reactions over her unfortunate eviction.

Nollywood actress, Susan Peters, was one of the earlier commentators. She has raised questions over Goldie’s shocking eviction.

Peters  expressed shocked that Goldie was evicted shortly after showing signs of being on top of her game just a few days ago. In a twitter message, she captured her thoughts: “As of Friday, Goldie was leading. I think they did ‘boju boju’ so Nigeria will be out.”

Movie producer Fidelis Duker was very terse: “Goldie evicted from Big Brother Africa…An end to the $300,000 and her failed musical career. Wonder who told her she could win after three successive win by Nigerians,” Duker said.

Another fan of the show simply known as Ngozi, in a text message to P.M.NEWS, frowned at the action of the singer when she was leaving the stage at the live eviction show. “Na wa oh, because Goldie lost out from BBA, does that warrant her dashed out her country’s pride (flag)? What a shame! She entered as an hero, but get kicked out as weak naija girl,” she stated.

Nigeria’s other representatives, Ola and Chris, had on 18 May voluntarily quit the game on account of ill health. For three consecutive years, Nigeria’s Kevin Pam, Uti Nwachukwu and Karen Igho, had won the competition in 2009, 2010 and 2011 respectively.