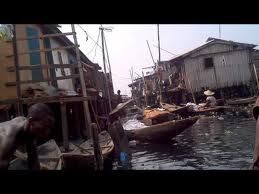 Officials of Nigeria’s Lagos State on Monday began demolishing the large Makoko waterfront slum in the economic capital Lagos, a move that could leave tens of thousands of people homeless.

The Makoko settlement consists of rows of shanties perched on stilts in the lagoon of Lagos, one of the world’s largest cities with an estimated population of roughly 15 million.

The Lagos state government on July 12 warned Makoko residents that “their unwholesome structures on the waterfront” amounted to an “environmental nuisance”, in a letter seen by AFP.

“Notice is hereby given to you to vacate and remove all illegal developments along the Makoko/Iwaya Waterfront within 72 hours,” said the letter from the Lagos state ministry of waterfront, infrastructure and development.

Community leaders said that the demolition had begun.

An official from the waterfront ministry who drafted the eviction notice, Akin Tijani, told AFP he was not able to estimate the number of people affected.

Some community leaders and activists however said tens of thousands of people live in the targeted slum, visible from the bridge that connects mainland Lagos to the wealthier island districts.

The Makoko settlement is divided between land-based and waterfront areas, with the inland residents not affected by the demolitions.

“The government has repeatedly given enough notice to those occupying these illegal structures to leave. But this has been to no avail as those involved would not listen,” said Raymond Adekunle Akonsemoyin, the community leader for all of Makoko, who lives on land.

A representative from the waterfront community told AFP the demolitions were having a “terrible” impact.

Amnesty International on July 6 condemned the government of the southern Rivers state for evicting without proper warning up to 20,000 people from a waterfront shanty community in the oil hub of Port Harcourt.