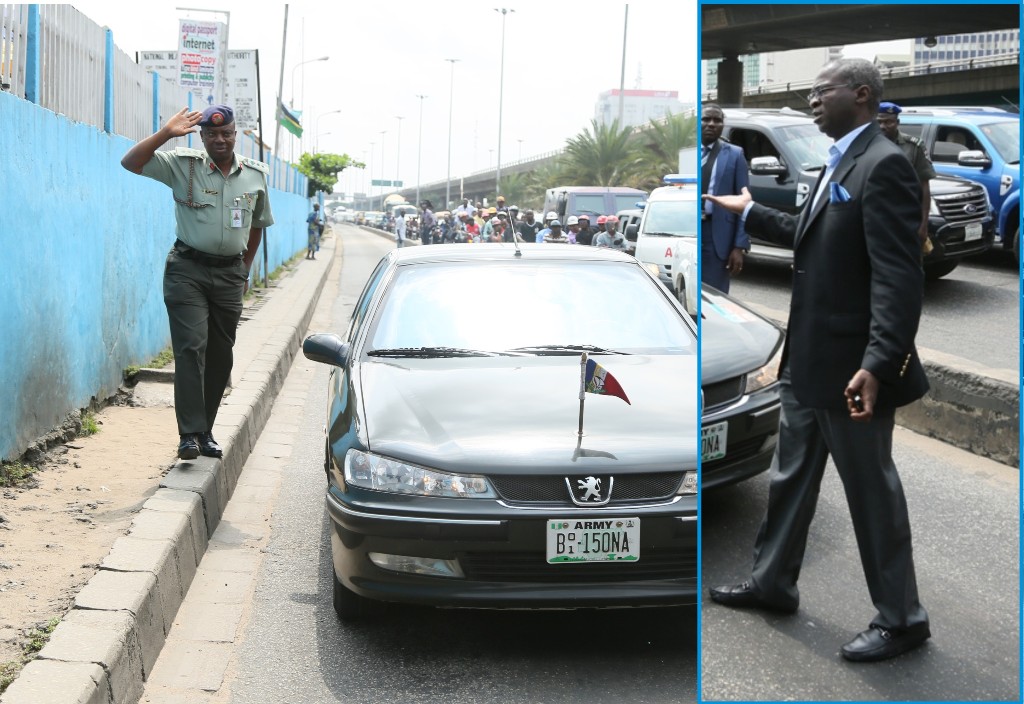 Lagos State Governor, Mr. Babatunde Fashola, Tuesday arrested two top military officers who drove on the dedicated Bus Rapid Transit (BRT) lane, expressing dismay that those who should show the highest form of discipline and professionalism were the ones violating the BRT regulation.

The two military officers, who were accosted on the BRT lane at the Outer Marina in Central Lagos, are Colonel Ki Yusuf who drove in an Army Green Peugeot 406 with registration number BO1 – 150 NA and Staff Sergeant Adeomi A.J. who drove in a black Toyota Camry.

Realizing that the game was up, Colonel Yusuf came down from his car, saluted severally and kept muttering “I am sorry, very, very sorry”, with the Governor enquiring why, as a senior military officer, Yusuf would choose to break the law instead of preserving it.

The arrest drew the attention of commuters and other passers-by who commended the Governor for showing good leadership and expressed joy that the senior military officers got caught in the act at last.

Fielding questions from newsmen after the incident, Governor Fashola described as very unfortunate the fact that those who ought to stand behind in defence of the democratic values of the nation are the ones violating the law.

Governor Fashola, who noted that the highest levels of the Military Command have expressed continuously their commitment to supporting democracy and to subjecting themselves and their officers to the laws of the country, declared, “those officers that I caught today are a very bad example for the military.”

The Governor said he had already made a representation to the superiors of the culprits, expressing optimism that they would be sanctioned appropriately.

He, however, added: “but it signifies my commitment and the commitment of the Lagos State Government that all those who will not comply with our laws should leave our state. We will not back down.

Insisting that people must behave themselves, Governor Fashola declared: “I don’t use the BRT lane, I sit down in traffic and I expect everyone who wants to drive his car to do the same. The alternative is to use the bus.

“The bus is for those who cannot afford to buy cars. They have the right also to use the road and we cannot encroach on that lane which we have reserved for them. This is democratisation of the road and I will defend it.”