I Want To Become A World Star Someday —Abiodun 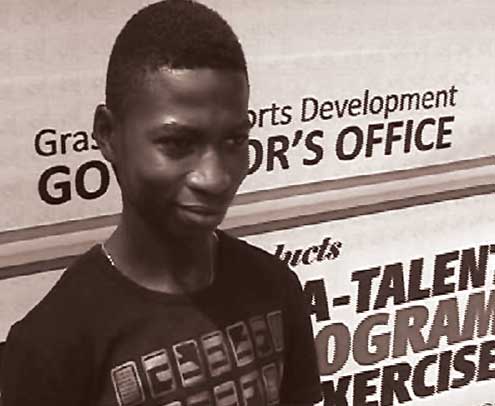 Taiwo Abiodun, one of the Adopt-A-Talent Sports Programme athletes.

To Taiwo Abiodun his ambition to become a world star in the future has been given a lift with the Adopt-A-Talent Sports Programme.

Abiodun is one of the young boxers under the tutelage of legendary boxing coach, Joe Mensah and the young pugilist said he would leave nothing to chance to ensure that he gets the best out of the trainer of the World Boxing Council, WBC champion, Olusegun Ajose.

Speaking with P.M.Sports during the just concluded screening exercise organised by the Central Working Committee, CWC, of the Adopt-A-Talent Sports Programme for about 201 athletes in Lagos at the weekend, Abiodun said: “The programme is an opportunity that young athletes like me should take serious.

“What surprised me most  is the interest the management of this programme has shown not only in our progress in sports, but they also take keen interest in our performances in schools. This has never been the case in previous sports programmes that I have seen in this country. I think this will go a long way in ensuring the future of the athletes.

“I believe in the future because I will become a world boxing champion with good educational background. I want to thank Governor Babatunde Raji Fashola for giving someone like me the opportunity which I can never get from anywhere,” he said.

One of the parents, Mrs. Dele Josaru, whose kid is a Judoka, said that Adopt-A-Talent Sports Programme is the best thing to have happened in Lagos sports. She called on other states of the federation to take a cue from what is happening in Lagos as talent-hunt programme like this is a platform where future stars can be discovered and properly groomed.

Judo coach, Edokpolor said he is giving the judokas under his care at least three to four years to become stars that Lagos State would be proud of.

“This is a good programme. I pray that the Adopt-A-Talent Sports Programme is sustained beyond the tenure of Governor Fashola,” he said.