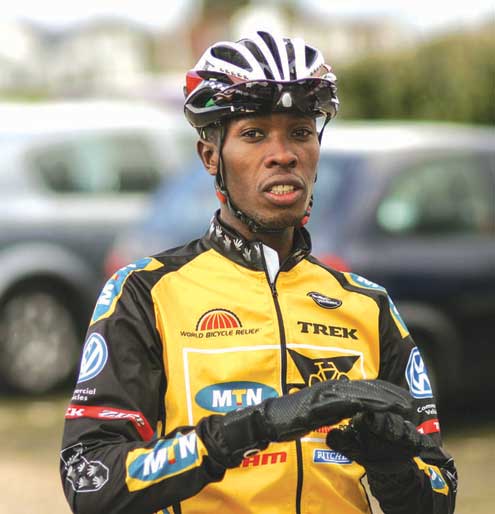 Adrien Niyonshuti’s memories of Rwanda’s genocide are hazy, but when he needs to shut off his mind and forget the slaughter that killed six of his brothers, he jumps on his bike.

The small-framed 25-year-old is preparing to become the east African country’s first Olympic mountain biker, honored with carrying the national flag at the opening ceremony of the London Games.

“When I ride my bike, there’s no one who can stop me or ask me anything so things are really good,” Niyonshuti said in Kigali, the Rwandan capital. “Riding gives me an opportunity to help forget the things that happened in 1994.”

Niyonshuti and his infectious grin are becoming increasingly well known in the city. As he cycles through the streets he is repeatedly called out to by well-wishers.

It was his uncle who inspired Niyonshuti as a youngster.

“Even though he wasn’t professional, my uncle was a champion in Rwanda for many years and everyone in this country knows him,” he said.

When Niyonshuti was 14, his uncle took him to watch the Tour de Rwanda race through his home town.

Now Niyonshuti is based in South Africa where he is a member of the MTN Qhubeka team, the biggest cycling team in Africa.

However it has been a difficult ride in between.

Beyond the loss of family members during the 1994 massacre that tore Rwanda apart along its ethnic seams, Niyonshuti is haunted by the death of one of his closest friends.

In 2008, Niyonshuti was out cycling with his friend and teammate from his first club, Team Rwanda, one of a generation of genocide orphans, when the friend was pulled under the wheels of a car and killed instantly.

The following year, Niyonshuti and his colleagues were violently robbed at their home in South Africa. One was stabbed in the leg.

“Sometimes these things that have happened affect me,” Niyonshuti said. “If I pass somewhere and I see someone have an accident or I’ve seen some riders crash in a race, I can get a bit affected and remember what happened to my friend. But then I try to think ‘this is life now,’ and carry on.”

Training for the Olympics six days a week has been grueling, the devout Muslim said, especially during the Islamic holy month of Ramadan when he fasts during daylight hours.

“The big event for me now is the Olympics, it’s great for me and for my country because it’s the first time we qualified for mountain biking,” he said.

However, his ambitions extend beyond London.

“But after that I will focus more on training and getting strong because then the real focus will be on being the first African team to compete in the Tour de France,” he said. “After the Olympics, I’m going to do more road bike and then I can pick up speed and the technical skills and work together with my team in South Africa and I hope that next year or the year after I will be going for the Tour de France.”

For now, Niyonshuti is focusing on the Olympics and making his family proud.