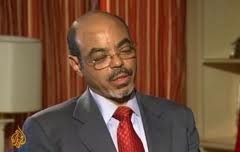 Ethiopian Prime Minister Meles Zenawi was reported to be in a ‘critical’ state this morning in a Brussels clinic, the AFP quoted yet to be identified diplomats as revealing.

Rumours about Zenawi’s death spread in Addis Ababa in the last few days when he missed the African Union’s two-day summit.

Meles’s wife, herself a lawmaker, declined to talk to reporters about her husband, while government officials were not available to comment.

The Ethiopian embassy in Brussels denied reports he was being treated at a hospital there as “false and wrong”, calling it a rumour created by “an interest group which has preoccupied itself in disseminating such untrue stories”.

It is believed to be the first time Meles has missed the AU summit in the Ethiopian capital. Meles, 57, has been at the helm of the Horn of Africa nation since 1991.

Dozens of African heads of state visited Ethiopia for the summit, including newly elected Egyptian President Mohamed Morsi, the first to do so since an assassination attempt in Ethiopia on former president Hosni Mubarak in 1995.

Benin’s president and current AU chairman Thomas Boni Yayi said at the opening of the summit Saturday that the “unusual absence… cannot go unnoticed, because we know that Mr Meles is full of dynamism and leadership in our meetings”.

One of last times Meles was seen in public was at the G20 meeting in Mexico on June 19.

Journalists and human rights campaigners are the target of “overly broad” anti-terrorism laws in Ethiopia where there is a “climate of intimidation”, the top UN expert said.

“The once vibrant civil society in Ethiopia has been whittled away as the space for them to operate freely has rapidly shrunk since the 2009 Charities and Societies Proclamation was passed into law,” Pillay said in a statement from the Office of the High Commissioner for Human Rights (OHCHR) in Geneva.

“The dramatic reduction in the number of organisations working on human rights issues, particularly on civil and political rights, is deeply disturbing.”

Some 20 Ethiopians, including journalist-blogger Eskinder Nga, were jailed on July 13 for up to 18 years after being accused of promoting anti-government protest in Ethiopia, including by using examples of the Arab Spring uprisings in the media.

Pillay said the “overly broad definitions in the July 2009 anti-terrorism law of Ethiopia result in criminalising the exercise of fundamental human rights.”

“Taken together, such laws have created a climate of intimidation,” she added.