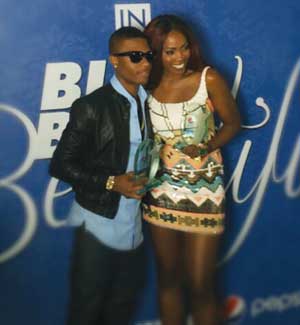 After months of speculation, the duo of Tiwa Savage and Wizkid have been officially unveiled as the new Pepsi ambassadors. The two rising singers were unveiled as Pepsi’s Blue, Bold & Beautiful campaign ambassadors during an exclusive event which took place at Likwid Lounge, Victoria Island, Lagos on 11 July.

“They represent the Pepsi brand essence of inspiring a youthful lifestyle and refreshing the world of our consumers,” Al Mazri said.

He added that Pepsi is very passionate about developing talents that abound in Nigeria, whether in football, as the Pepsi Football Academy has been doing for the past 20 years or the newly introduced MBA Harvard Business Scholarship aimed at giving young Nigerians a world class education.

Globally, the popular soft drink has for many years, engaged top music and football stars as its ambassadors and for marketing campaigns.

For the Pepsi boss, the brand will support Tiwa Savage and Wizkid to take their music careers to the next level through promotion within and outside the country.

The duo, who have been rocking the entertainment scene both within and outside the country with their brand of music are the latest additions on the list of Nigerian musicians. Others are Ashionye who was signed as Face of Pepsi Lite in 2007, and Lynxx who represented the brand in 2010.

A few weeks ago, Wizkid and Tiwa were whisked off to location to film the TV commercials and print ads for the campaign.