No apologies: Dame Jonathan sworn in as permsec 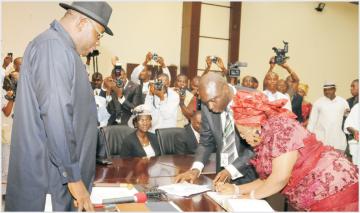 Governor Seriake Dickson went ahead today to swear in wife of Nigeria’s president, Dame Patience Jonathan as one of the new permanent secretaries in the president’s state of Bayelsa, ignoring an array of public condemnations.

At the ceremony today, Dickson insisted that he had “done nothing wring and illegal” and that Mrs. Jonathan merited the post.

Unlike the other permanent secretaries, Dickson did not announce a portfolio for her, saying it would be done at a later date.

Many Nigerians, including opposition politicians have condemned the appointment in strong terms.

Frank Oputu, state chair of the Conference of Nigerian Political Parties said the “appointment greased with the oil of corruption” as the woman lacks the credentials to merit the appointment.

A permanent secretary heads a ministry and is the accounting officer.

In her response after the swearing-in, Dame Patience Jonathan justified her acceptance of the promotion to the office of a Permanent Secretary in the civil service of the Bayelsa State government saying that outside her role as the wife of the President she deserves and reserves the right to pursue her career to its heights.

She said that she wasn’t the first person in such position in the world or the country to pursue a career outside her role as a wife of a political office holder.

She said that she was last promoted 13 years ago even though she had been working in the state as a teacher before transferring her service to the ministry of education.

She disclosed that she had been working as a teacher before she met her husband who was her lecturer in school.She wondered what the uproar about her appointment was all about when her role as the First lady of the federation was not even constitutional and the fact has been drummed to her hearing by several people.“When it suits them, they will say we don’t have office. Remember when I went to Lagos for peace advocacy, the Governor of Lagos State said that my husband should call me to order since my office is not in the constitution and that I have no office. Why now won’t I pursue my career that I am sure of?“

“We the wives of political office holders, if our name is not in the constitution and our husbands will retire with full benefits then they should find a role for us when they are amending the constitution. They should look into our own affairs,” she said.