Sudanese to run under Olympic flag 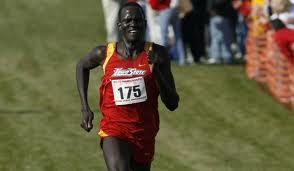 A marathon runner born in what is now South Sudan, will be allowed to run under the Olympic flag in London, the International Olympic Committee said on Saturday.

As a 16-year-old, Guor Marial moved to the U.S., where he has permanent resident status.

South Sudan, the world’s newest country recognised only last year, has not yet established a national Olympic Committee -and so cannot send a team to the Games starting next week – Marial was unable to represent that country.

As he is not a U.S. citizen, he was also ineligible to take part for the U.S.

The IOC had initially suggested Marial run for Sudan, which has invited him to join their team, the runner told AlertNet, a humanitarian news service run by Thomson Reuters Foundation.

Marial, who lost 28 members of his family in the civil war, refused.

Sudan and South Sudan came close to all-out war in April following border clashes, the worst violence since South Sudan seceded and declared its independence from Khartoum a year ago, under a 2005 peace agreement that ended decades of civil war.

Three athletes from the former Netherland Antilles will also compete under the Olympic flag.