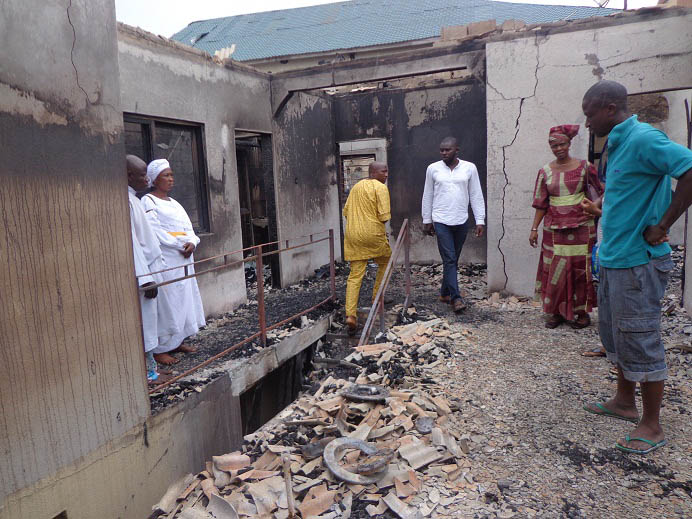 Gbenro Adesina, Ibadan
Reports from Ibadan, Oyo State say an early Sunday morning fire razed the multi million naira duplex of former Super Eagles and ex-Barcelona of Spain star, Gbenga Okunowo.
Okunowo, who is still in shock, told P.M.News that his duplex was razed to the ground by a fire which started from the Power Holding Company of Nigeria, PHCN premises behind his house situated at Number 7 Iyalode Crescent, Ring Road Ibadan. The duplex is valued at about N80 million.
A staff of PHCN, who spoke with P.M.News under anonymity, said the fire started around 2:30 am from the drivers’ office at the back of the main building, popularly known as Capital Building in Ibadan.
He said, “I was on duty when it started. It started from the drivers’ office, a makeshift wooden building. We just saw the fire and we were helpless as one of the staff, who was expected to be on duty stayed away because PHCN staff are on strike.
“There was no fire extinguisher around and we don’t have the telephone numbers of the fire service men. So, we had to trek to the office of the fire service at Challenge, but unfortunately, the fire had done its havoc before the service men arrived at the venue”.
Another eye witness disclosed that about 12 soldiers deployed to safeguard the PHCN office, also watched helplessly as the inferno was destroying Okunowo’s duplex early today.
“The soldiers, who were brought to safeguard the PHCN office because of the current strike action being embarked upon by its staff, could not do much, the witness said.
The fire also razed 12 vehicles belonging to the PHCN beyond recognition. Okunowo, who managed to speak with our correspondent lamented that he lost everything to the fire disaster. He said apart from the multi million naira duplex, he also lost some cash running into millions to the fire.
“Ah! My whole house has gone. Even the clothes; boxers and bathroom-slippers that I’m wearing now were given to me by friends,” Okunowo lamented.
“My passport, my European residence papers, my medals and trophies, all my belongings in the house were lost to the fire. I was just lucky that no one was injured from this unfortunate incident.
“My wife is out of the country but my her younger brother and a friend were with me in the house when the fire started from the PHCN office. And before I knew what’s amiss, it has spread to my house.
I feel terrible because the PHCN staff around did not do anything to salvage the situation. What they told me was that the maintenance staff of the company, were all on strike.
Before the fire got to my home, I was pouring water on it through the window but I could not put it off. We even called the fire service in Ibadan but nobody picked our call.
“We then ran to their office in Challenge to call them, but before they came, everything that I had in the house was gone”.
The confused former Barca star continued: “I don’t know what to do now. I have lost everything. I don’t even have any cloth to put on now. All my cloths were burnt in the duplex.”
Okunowo, who disclosed that he insured the duplex, hinted that he would discuss with the PHCN management on Monday to see how they could rebuild his house.
“I hope they cooperate with me, otherwise, I will have to go to court.”
He further told P.M.Sports that he did not know where to sleep today. “I don’t know where to go right now. May be I will put up with a friend and spend the night in his house.”
Meanwhile, sympathisers have been visiting the house of the professional footballer to console him for the pathetic loss of his property to the ill-fated fire