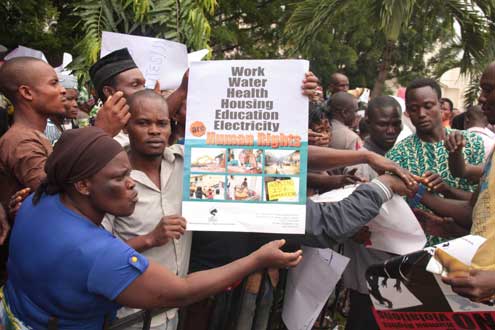 File Photo: Makoko residents protesting over the demolition of their homes by the Lagos State Government, this morning at Alausa, Ikeja. Photo: Idowu Ogunleye.

Lagos State Governor, Mr. Babatunde Fashola has explained why his administration had to intervene in the Makoko fishing community in the Lagos Mainland saying it had become necessary to halt the continuous expansion of the community into the lagoon with its negative impact on the environment.

Addressing scores of protesting Makoko residents who came to the Lagos House, Ikeja to appeal for a reconsideration of the decision to demolish parts of the fishing community, Governor Fashola explained that while the State Government was finding a solution for residents within the recognized boundaries, it would not allow further expansion of the community.

Governor Fashola said sequel to several meetings with leaders of the community and an agreed boundary set, the State Government had been working in the area to find solution to the difficulties which the indigenous residents encounter by way of providing basic infrastructure and amenities to uplift the standard of life of the people who, according to him, have been there for a long time.

Continuing, the Governor explained that rather than maintain the established boundary, what had happened over the years was a rash of illegal shanties which expanded towards the Third Mainland Bridge and underneath the high tension electricity cables across the area.

Expressing the readiness of his administration to meet with genuine representatives of the community, Governor Fashola advised them to be wary of people who are profiting from their difficult situation. He also advised the community to resist being used by people who want to take advantage of them adding that some people were already collecting grants from the outside world under the guise of helping them.

The Governor noted that piling saw duston the lagoon, discharging wastes in it and blocking the discharge points for storm water had contributed to the flooding in places like Bariga, Shomolu, Ebute-Metta, Ogudu, Owode, Ajegunle and Ikorodu, among others.

“The truth must be told; some people are benefiting from your difficulty and that is the truth. They are taking advantage of you in the guise of being your friends. They are taking all sorts of grants purporting to help you but it never gets to you. But as your Government, we understand the challenges you face there and we are working to solve them”, the Governor said.

According to the Governor, who said the primary concern of his administration is to uplift the standard of living of the indigenous members of the community which has existed for over 60 years, “Now, as we are finding solution to the boundaries we recognize, we will not allow further expansion”.

“We owe you a duty, but we also owe the greater part of Lagos a duty. That lagoon is the only lagoon where we drain water during rainy season from Akoka, Bariga, Shomolu, Oworonsoki and from Macgregor Canal. The lagoon is shrinking because they are expanding and building into it; it has to stop”, the Governor said.

Governor Fashola said the way forward was for the leaders of the community to team up and meet the State Government to find a lasting solution to the problem adding that he is currently working with people within and outside the country to find a way to expose the community as part of the culture of Lagos where the indigenous people could live in a clean environment with clean drinking water and other basic amenities while they also engage in their fishing occupation.

He said the doors of the Government were open at all times and that he would welcome such a team as appointed by the community to find lasting solution to the problem adding that the community’s peaceful approach would lead to much more progress.

Governor Fashola explained that the State Government has no problem with those living within the recognized boundaries adding, “We are working to provide water, schools, libraries and so on for you. But those who have just come must leave. That is the reality”.

Describing the decision to stop the illegal expansion by the new comers as “very, very difficult”, the Governor said the chances of the Government are limited adding that if the place must be sustainable to accommodate the indigenous people and other interests, the continuous expansion has to stop.

“We have land in other parts of the State that are close to water, so if communities want to apply for land, we will give them land; but you cannot build on the lagoon”, the Governor insisted adding, “That is the natural drainage that God has given us and we have to preserve it. The only issue was the expansion of the community and the time to define the boundary is now”.

Noting that various groups and individuals have diverse interests such as sensationalizing the issue and making it a human rights issue, Governor Fashola said the only real issue that is in the interest of the indigenous community and the State Government was to ensure that the people of Lagos co-habit together and find solution to the common problem in order to get on with their lives.

Earlier, while giving reason why the people came to the Government House, their spokesman, Chief Yusuf Sadiq Jejelaye, said the people decided to come and appeal to the Governor to advise those carrying out the demolition to stop the exercise pointing out that the people had nowhere to go from there.

Also present during the visit were members of the State Executive Council including the Commissioner for Information and Strategy, Mr. Lateef Ibirogba his Special Duties and Waterfront Infrastructure counterparts, Dr. Wale Ahmed and Prince Olusegun Oniru, among other top government functionaries.