Ethiopia's Zenawi in a blaze of glory at funeral - P.M. News

Ethiopia's Zenawi in a blaze of glory at funeral 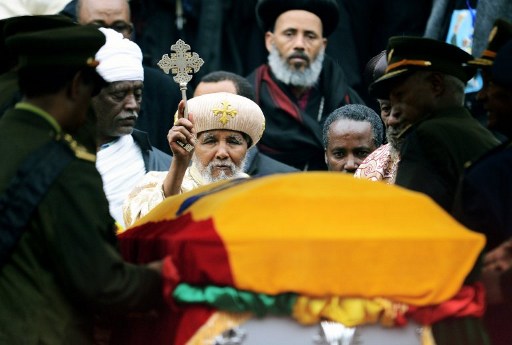 Tens of thousands of Ethiopians mourned Sunday the late strongman Meles Zenawi, in the first state funeral staged for a leader of the Horn of Africa nation in more than 80 years.

Followed by giant crowds, Meles’ flag-draped coffin slowly processed through the capital from the National Palace to the vast Meskel Square, his family dressed in black following behind, many in tears. 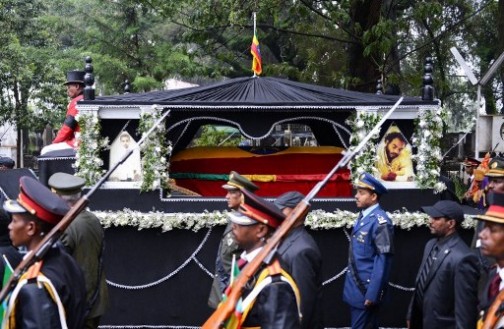 The coffin arrived on top of a horse-drawn carriage adorned with white flowers and pictures of Meles — who died last month aged 57 — as a boy and young man, before the casket was placed on a stage above the giant crowd.

Ethiopia’s deputy Prime Minister, Hailemariam Desalegn, who will lead government until national elections in 2015, sat right behind the coffin, and welcomed the many African leaders and foreign dignitaries who are attending.

“All his initiatives will keep going forward, all the transformation plans will progress,” he promised.

Senior officials from China, the European Union and the United States were also expected.

Thousands of soldiers stood guard as the ceremony progressed, some of them crying.

The funeral ceremony will later move to the capital’s Holy Trinity Cathedral, where Meles will be buried.

Meles died in a Brussels hospital on August 20 after a protracted illness. He had not been seen in public for two months, spurring rumours about his health.

The former rebel turned regional strongman took power in 1991 after toppling dictator Mengistu Hailemariam, remaining at the helm of Ethiopia — a relatively stable country in the volatile Horn of Africa region — until his death.

But while he was credited with bringing about widespread economic growth, rights groups criticised him for what they said was a crackdown on opposition groups and journalists.

His successor Hailemariam will be sworn in after Meles is buried, although no date has been fixed. He is a relatively unknown politician who hails from the south, unlike many of the country’s political elite who are from the north.

While Ethiopia has hosted a series of state funerals in recent decades — including that of popular musician Tilahun Gessesse in 2009 — the last leader to be so honoured was Empress Zawditu in 1930.

Ethiopia’s last emperor Haile Selassie, who was murdered in 1975 by coup leaders, is also buried at Holy Trinity Cathedral.