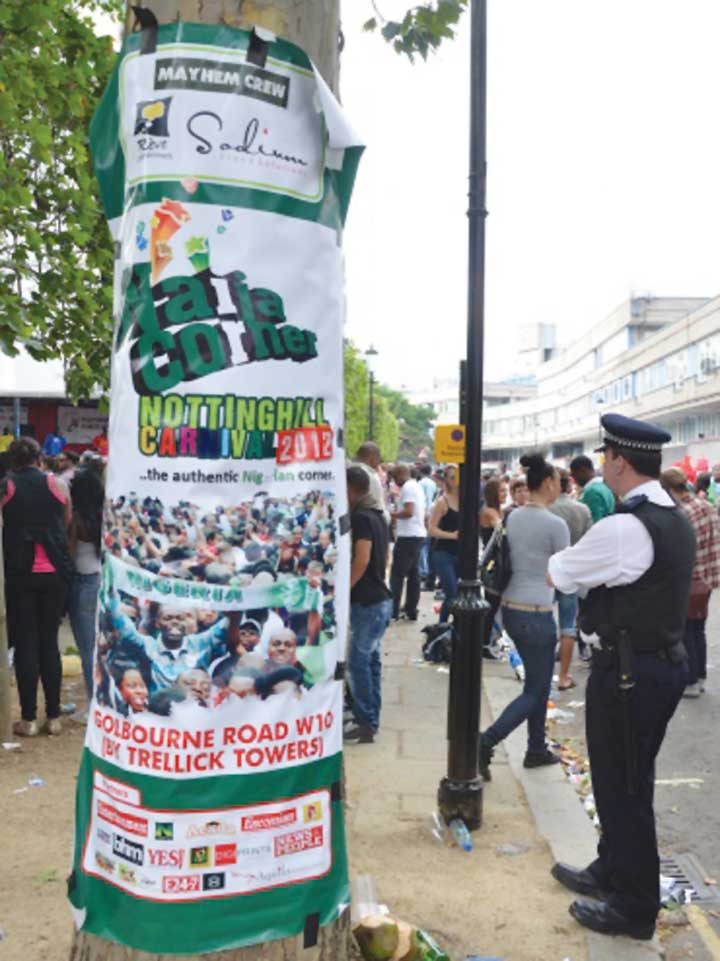 Seldom has London been luckier. This year alone, the British capital has played host to hundreds of thousands of visitors streaming into the city for various landmark events, especially during this summer; thanks to the Diamond Jubilee celebration of the revered Queen Elizabeth II on the throne, the spectacular Olympic Games, and the on-going Paralympics. Since the Olympic Games ended, there seemed to be a gaping hole in the city’s events calendar. But happily, that space was filled by the prestigious Notting Hill Carnival, held in the weekend of the 26 and 27 August Bank Holiday. And much of the country is bursting with pride and patriotism, especially about the carnival, touted as Europe’s annual biggest street party.

As the sun shone down on scores of streets around the Golbourne Gardens and Ladbroke Grove, over 500,000 revellers who defied the earlier downpours gathered to enjoy the West London street festival; prominent among them were many Nigerians and their friends clad in different green and white costumes and accessories. The main attraction was the ‘Naija Corner’ situated at Golbourne Road, opposite the imposing Trelick Tower. With hundreds of Metropolitan Police personnel on the watch maintaining order, the crowd’s enthusiasm surged when top Nigerian music acts and comedians – including Gbenga Adeyinka, Julius Agwu, Kay Switch, Mr. Solek and Princess – mounted the stage in turns to perform.

“We have gathered to do Nigeria proud again at this year’s carnival. As I’ve said previously, it’s the Olympic year, thus this year’s carnival is a special one too. We are so proud to join the rest of the world in the spirit of friendship and joy, as well as show the world our culture and values through our rich music, comedy, fashion and arts,” Abisoye Fagade, CEO, Sodium Brand Solutions and executive producer, ‘Naija Corner’, announced exultantly.

The Bank Holiday covers two days. But Sunday was a more family-friendly day to take children to the carnival, with the main parade on Monday winding a path from Great Western Road, along Chepstow Road and Westbourne Grove to Ladbroke Grove. The Ladbroke Grove station is usually closed on both days, with other stations in the area permitting exit only, except Kensal Green and Bayswater which opened for service all through the weekend.

Since its debut in 1964, the event has grown, and morphed, attracting ever more revellers with its spectacle of floats featuring different bands and series of sound systems powered by different deejays. “It has been a brilliant day with fantastic music and dance. I can feel the rhythm in my heart,” said Michelle Popescu, who travelled down from Ashford, Kent to be part of the party.

There were other spectacles to behold at the carnival that attracted many Nigerian celebrities, including actors Sam Dede, Iyabo Ojo and Mercy Aigbe. “You can be sure of dense crowds and a vibrant celebration of music, movement and masquerade together with Caribbean and African food stalls serving various traditional meals and snacks,” Idris Olumegbon, who was part of a Nigerian float with three fully costumed Eyo masqueraders on parade, told TheNEWS at a food stand on Portaballo Road, close to the ‘Naija Corner’. Among the many other floats was that of  Rivers State, which ran along a procession route from Ladbroke Grove to Westbourne Grove, Goubourne and Chepstow Road. But while most people enjoyed the variety of music, food and drinks, the atmosphere in some streets was tense. Over the two-day event, more than 230 arrests were made by the Met Police, though none was recorded at the Naija Corner.

But Kunle Adebiyi, a British-Nigerian who was at the carnival with his family for the first time, frowned at the rate alcohol and marijuana were consumed in the open. “I was very surprised to see so much alcohol consumed in the streets, with so many bars selling rum and beer. This whole thing just seemed like an excuse for adult street party where irresponsible parents blew cigarette smoke in their children’s faces and unthinking adults were allowed to dance in sexually provocative ways in front of babies, small children and teenagers,” Adebiyi said.

The carnival began largely as a multicultural riposte to the Notting Hill race riots of 1958. It started out as an indoor festival in St. Pancras Town Hall, with Claudia Jones, a feminist and black rights campaigner from Trinidad and Tobago, regarded as the event’s progenitor. She helped to organise the first carnival, with the slogan: “A people’s art is the genesis of their freedom.”

The ‘Naija Corner, now in its fourth year, is organised by Reve Entertainment and Sodium Brand Solutions, with support from BlackHouse Media Group, Hip TV and NET.