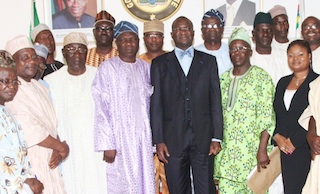 The new Lagos Road Traffic Law Monday garnered more support from stakeholders in the transport sector as the National Union of Road Transport Workers pledged to cooperate with the government to ensure full implementation of the law.

President of the Union, Alhaji Najeen Usman Yasin, who made the pledge at Lagos House, Ikeja, while on a courtesy visit to the State Governor, Mr. Babatunde Fashola (SAN), pledged that members of the Union would remain law abiding in the exercise of their lawful functions in the State.

Alhaji Yasin, who led other top officials of the national body of the Union on the courtesy visit, noted with gratitude that the administration of Governor Fashola had, through its people-orientated policies, especially in the Transport sector, enabled the Union to prosper through the establishment of mass transit operation in the State.

He told the Governor, “We seize this opportunity to convey our deep appreciation for the consideration of NURTW as a recipient of your generosity as demonstrated by the maximum support Lagos State Government gave the union, especially in the establishment of the BRT scheme”.

“Implementation of the BRT scheme by the Union has, apart from assisting our Union to acquire vehicles for mass transit operations, also gone a long way towards boosting public transport and accessibility to safe and secure road transportation in the State”, the Union President said.

The President commended the Lagos State Ministry of Transport , LAGBUS and the Lagos Metropolitan Area Transport Authority (LAMATA) for working assiduously to fashion out modes of operation of the mass transit buses through the objective selection of routes and locations so as to ensure ease of administration, deployment, maintenance and convenience of prospective passengers who patronize the buses.

According to him, because of the enabling environment created by the present administration, the Union was able to immediately deploy to Lagos part of the buses allocated to it early this year by the Federal Government to cushion the effect of the withdrawal of oil subsidy adding that the decision was also informed by the fact that Lagos is the economic capital of Nigeria.

Yasin also praised the administration of Governor Fashola for “the spate of development that cut across the entire State”, adding, “The various strategies being implemented by your administration over the years has indeed gone a long way towards improving the welfare of the working class and addressing the infrastructure deficit in such vital areas like roads, transportation, health, education and security”.

“Taking stock of the numerous developmental projects embarked upon by Your Excellency since assumption of office in 2007, it is our belief that advancing the socio-economic growth, development, prosperity and peaceful co-existence of the good people of Lagos State is your basic objective”, the union President said

Responding, Governor Fashola charged the union members to be champions of the change that the State is bringing about through the new Traffic law, because, according to him, “You are the greatest beneficiaries”, adding that the only way to succeed with the new law is for the members of the National Union of Road Transport Workers to play within the rules as provided in the law and not outside it.

The Law, according to the Governor, does not seek to punish anyone but to ensure that sanity is restored on the highways, stressing that what many people do not realize is that each time a vehicle drives against traffic, the resultant traffic congestion results in loss of man hours.

Governor Fashola explained that contrary to insinuations in some quarters, the new Lagos Traffic law has not banned the activities of the NURTW but has only directed that all activities of transport unions be conducted in the union offices.

According to the Governor, “Just as professional associations like lawyers and accountants collect their dues from their members in an organized manner devoid of running after them publicly, the same should now apply to the transport unions who must stop using the motor parks and bus stops for collecting dues from operators”.

Governor Fashola who expressed dismay that the motor parks in the State have been taken over by touts who perpetrate all forms of atrocities while the parks have become selling points for alcohol and drugs, further explained, “It is in the best interest of the transport unions to support the government initiative as that will assist the government in identifying touts who operate in the motor parks but masquerade as transport union officials and allow the law to take its natural course as it affects them”.

The Governor, who commended the union for the visit and kind words by the President pointed out, The NURTW is a critical stakeholder in the transport sector just as the government realizes that it is its responsibility to provide road infrastructure”, adding that it is also the duty of the union to ensure its sustenance.

He reiterated that when the government builds roads, it is for the prosperity of those in the transport sector, stressing that as such businesses expand, there must be a corresponding sense of responsibility shown to the commuters who travel through the roads.

Reiterating that the Bus Rapid Transit (BRT) blue buses belong to the NURTW while the operation is only being regulated by the State Government, Governor Fashola declared, “As a way forward, the government has included a BRT dedicated lane on the Lagos Badagry Expressway which is being expanded into a-10 lane super highway”, adding that the same has been done in terms of the Mile 12-Ikorodu Road which is about to be constructed just as the government has also designed Ikorodu to Ikorodu township to have a BRT dedicated bus lane.

Governor Fashola advised that from now on, the emphasis nationwide should be about how to manage traffic which could not just be wished away but addressed through appropriate usage of roads. He reminded the Moslem faithful among the delegation that whenever they travel to Saudi Arabia for pilgrimage they often experience very high vehicular traffic which however still moves due to observance of traffic laws and wondered why the same cannot be replicated in Nigeria.

The Governor expressed gladness that companies have started engaging legal practitioners to train their drivers on the provisions of the new law and urged the unions to also ensure that their drivers are trained at the drivers training Institute which have been fully equipped for such tasks.

Commending the State Commissioner for Transport and his team for embarking on a massive provision of street signs round the State and also undertaking lane markings and designation of pedestrian walkways, the Governor urged members of the union not to be limited in their scope as the State still intends to build railways which could still open investment vistas in terms of operation of coaches which can be funded and operated through a union adding, “The same applies for airlines which the union can aspire to run, although it will be dependent on strict observance of the law as infractions such as indiscriminate changing of predetermined routes are not allowed”.

The Governor also defended the provision that all articulated vehicles except tankers can only move from 9pm on Lagos roads, saying that it is aimed at bringing back sanity to the roads.

Prominent among those who were present during the visit were the Deputy Governor, Hon (Mrs) Adejoke Orelope-Adefulire, members of the State Executive Council including the Commissioner for Transportation, Mr. Kayode Opeifa, Information and Strategy, Mr Lateef Ibirogba, Works and Infrastructure, Dr Femi Hamzat, Local Government and Chieftaincy Affairs, Mr. Ademorin Kuye and Special Duties, Dr Wale Ahmed. Among members of the National EXCO of the NURTW on the visit were National Vice President, Alhaji Adegboyega Tomori, Deputy General Secretary, Chief John Olaoye and General Secretary of the Union, Mr. Clement Watkur among others.