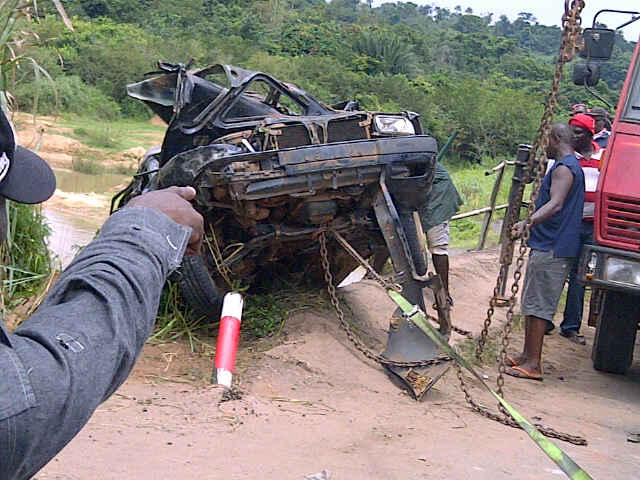 The 78th birthday celebration of business magnate and father of Lucky Igbindeion, former governor of Edo State, Chief Gabriel Osawaru Igbinedion, assumed a disastrous dimension on Wednesday, as one of the vehicles in his entourage plunged into the Ovia River, killing the four occupants instantly.

The casualties whose identities could not be ascertained at press time were said to be lecturers of Igbinedion University, Okada, who travelled with Chief Igbinedion, the Esama of Benin Kingdom, who earlier in the day launched his Benin-based Independent Television into satellite for viewing in 104 countries.

The carnival-like train had left for the country-home of Igbinedion, Okada, after the launching at the television station where another celebration took place, after which they returned to Benin City.

Disaster struck when the driver of one of the cars, an Audi 80, in the convoy conveying the four lecturers lost control and plunged into the Ovia River, along the Benin-Ore Road, killing all the occupants.

Three years ago, during his 75th birthday celebration, one of his staff died in an accident, while running an errand for the Benin high chief.

Also last year, Omoregbe Okpenye (aka Bayo Ade), a musician who was entertaining his guests at his palatial residence in Benin during his 77th birthday celebration was suddenly kidnapped by unidentified gunmen and later killed.