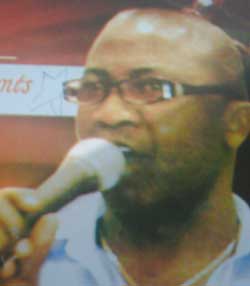 Top Fuji music acts including Aare Shina Akanni, Abass Akande Obesere (PK1), Sule Alao Malaika and Remi Aluko will on Sunday, 9 September, 2012, drag their fans and other Fuji music enthusiasts to Nigerian Army Officers’ Mess, Sabo, Yaba, Lagos, to honour one of their colleagues, Alhaji Lateef Student Fuji a.k.a. Seriki Onifaaji, who recently returned to the country after almost a decade’s sojourn in the United Kingdom.

Also expected to perform at the star-studded event put together by Prince Tayo Adeolokun-owned TASMAN Music Promotion, are the London returnee himself, female act, Fatimo Ajoke Cinderella and other upcoming artistes.

Lateef, who told P.M.NEWSEntertainment that he was inspired by the likes of Kasali Alani a.k.a. Jolly Lawa and Alhaji Ramoni Akanni in the early 1970s, when he was playing Fuji before he migrated abroad, adding that his musical exploits in the UK were quite challenging and rewarding.