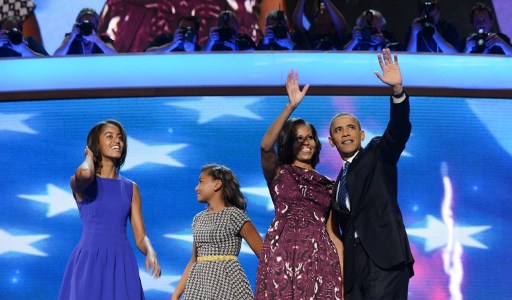 “If last night was the party, this morning is the hangover,” Romney said, immediately pouncing on the figures to argue Obama had failed to deliver on a promise to lead America back to prosperity.

The Labor Department figures showing that the economy created only 96,000 jobs last month came just hours after the president asked voters for four more years and warned that picking Romney would risk a return to economic crisis.

The figures, which also showed the unemployment rate ticked down to 8.1 percent as disgruntled workers stopped looking for jobs, reflected the still depressed economic environment dragging on Obama’s reelection hopes.

The flat report cast a shadow over the president’s post convention tour of New Hampshire, Iowa and Florida, and could trim any opinion poll bounce he can expect after his party’s convention in North Carolina.

Romney responded to the new jobs number with a statement as he flew to Iowa to launch a day where he will go head-to-head with Obama in the midwestern swing state and in the New Hampshire battleground.

“This is more of the same for middle class families who are suffering through the worst economic recovery since the Great Depression,” Romney said.

“After 43 straight months of unemployment above eight percent, it is clear that President Obama just hasn’t lived up to his promises and his policies haven’t worked.

“We aren’t better off than they were four years ago. My plan for a stronger middle class will create 12 million new jobs by the end of my first term. America deserves new leadership that will get our economy moving again.”

There was no immediate reaction from the White House to the report, but Republican Party chairman Reince Priebus jumped on it, saying Americans should reject a president who promised hope and change but delivered “division and despair.”

“We’re not creating jobs fast enough, and we’re certainly not better off than we were four years ago. Time is up Mr. President.”

Republicans claim Obama is out of ideas and has no ideas how to create jobs, and the report will frustrate Obama’s hope to make the November 6 election turn on issues other than the tepid economy. 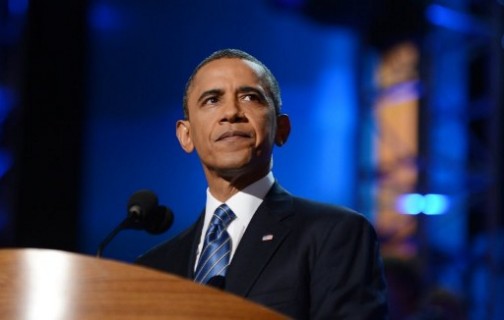 Obama on Thursday implored Americans to give him four more years in the White House, arguing that Romney and his running mate Paul Ryan would gut the middle class and return to “blustering and blundering” abroad.

He seemed to anticipate the disappointing jobs number in his speech to a packed sports arena, warning “it will take more than a few years for us to solve challenges that have built up over decades.”

The 51-year-old president directly confronted the deflated hopes spawned when he became America’s first black president amid expectations he would lead an era of transformation and bridge the country’s now-gaping partisan divide.

“The election four years ago wasn’t about me. It was about you. My fellow citizens — you were the change,” Obama said, citing his ending of the Iraq war, more rights for gays and lesbians and near universal health care.

“If you turn away now — if you buy into the cynicism that the change we fought for isn’t possible — well, change will not happen.”

He also blasted Romney and Ryan as dangerous neophytes on foreign policy.

“My opponent and his running mate are new to foreign policy, but from all that we’ve seen and heard, they want to take us back to an era of blustering and blundering that cost America so dearly.

“After all, you don’t call Russia our number one enemy — and not Al-Qaeda — unless you’re still stuck in a Cold War time warp.

“You might not be ready for diplomacy with Beijing if you can’t visit the Olympics without insulting our closest ally.

Again and again, Obama cast the election as a choice — between his policies designed to lift up the pained middle class, and Romney’s “trickle down” economics, which he said risked a return to recession.

“When you pick up that ballot to vote — you will face the clearest choice of any time in a generation,” Obama said, forecasting fateful choices looming on jobs and taxes and war and peace.

“I never said this journey would be easy, and I won’t promise that now. Yes, our path is harder — but it leads to a better place. Yes, our road is longer — but we travel it together. We don’t turn back. We leave no one behind.”

Obama cast his speech as a rallying call for Americans to unite to overcome the gridlock that has paralyzed Washington, warning that Romney would fire teachers, impoverish students, all to give more tax breaks to millionaires.