Agbor: A place where a motor cycle can buy you love 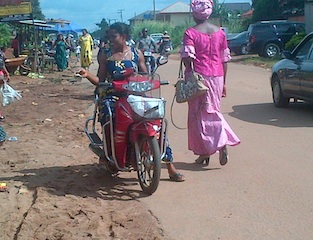 
After chasing his sweetheart unsuccessfully for close to two years, Francis decided to woo her with what is considered here one of the most appreciated gifts: a motorcycle.

He raised money for another six months from his new job, cut down on his monthly expenses and bought her ‘Daylong’, one of the most sought after mortocycles here for women that costs about 700 US dollars (N104,000).

Few days after, she fell in love with him and a love affair began here in Agbor, a community in Delta State, south south Nigeria.

The sight of women, young and old, on motorcycles here can be overwhelming for first time visitors.

A ride on Owatan, owalero, asanagbor, obi agbor or lagos asaba roads, some of the major roads in town in Agbor gives the impression that there are as many motorcycles as there are people.

Virtually all women in this city have motorcycles that take them to work, market, farms, church or weddings.

The type of motorcycle, however, determines the status of the husband.

Daylong is for the wealthiest women or women married to the wealthiest men in the communities. Nasara and Lifan, which go for about 600 US dollars or N89,000, are very popular and riding by other privileged women.

Many women who cannot afford Daylong ,Chonsmic, Nasara and Lifan go for other cheaper motorcycles.

Men are seen riding Lifan or Qlink brand of mortocycle. All the streets and major roads are filled with motorcycles.

If the story of Francis, who did not want his surname in print, was successful, that of Jude Ofuebuzor, who fixes broken motorcycles at garage market, was devastating.

Jude could not afford to buy motorcycle for his girlfriend. She made a second request. She needed a mattress with a pillow so she would stop sleeping on a mat.

Asked if he can buy a motorcycle to a girlfriend or a wife, Jude cackles and says it is a very risky investment, even when dealing with your wife.

“That is impossible. Why should I invest so much on a woman. No I can never buy a motorcyle for a girl. It is risky. She may start going about town and before you know it, she escapes with other men.

“The best thing is you buy a motorcycle for yourself and drop her at her shop in the morning and come and pick her in the evening. That way you will know where she is at every point in time.

“In any case, if your wife has a machine (motorcycle), and you have one too, how do yoy show her you are the man? You know when a man has a motorcycle, on Saturday, you take her out and on Sunday you take her to church and she feels good. She feels loved and protected,” Jude says.

Jude says girls in Agbor are now very materialistic. He now dates a girl in Lagos.

“She has never asked me for anything. All I have spent on her since I started seeing her two years ago is N600 (4 dollars). She is in Lagos and we talk on phone everyday. She is the one now buying things for me. She’s not like all the girls I met before.

“I don’t care if she has a boyfriend in Lagos because in this life many men will ‘use’ your woman before you also use her. Once you marry her, you begin to use her alone,” Jude says smiling.

Asked if he can buy a motorcycle for her, he smiles and says “maybe later when she has children for me. She promised to come back on 20 December this year and be with me for ever.”

To Mrs. Success Edosa who runs a big shop at Owa and drives a Daylong motorcycle, it is a necessary mode of transportation.

“Men cannot afford to buy us cars so they go for bikes,” she says.

According to Jessica, who says she’s self-employed, it is a mistake to buy a motorcycle for a girlfriend.

“You can buy a bike for your wife, not your girlfriend. Bikes are important here because of our bad roads,” she says.

Idris Ibrahim, who hails from northern Nigeria and runs a recharge phone business at garage market says buying your mother or father in-law motorcycles can buy you blessings and honour.

“You see if I am dating her now,” he says pointing at a young girl nearby, “and I buy a bike to her mother, it will bring me blessings. She will love me even more and her daughter will be mine even quicker.