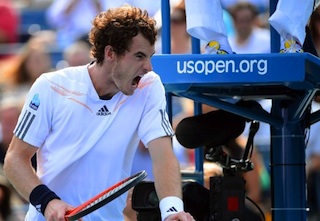 The 25-year-old Scotsman owns a 6-5 career record aginst Ferrer but trails Djokovic 6-8 in their all-time rivalry.

Murray, trying to become the first British man to win a Grand Slam title since Fred Perry at the 1936 US championship, battled through brutal winds to reach his fifth career Grand Slam final and second at the US Open.

Despite wicked breezes, Murray connected on 74 percent of his first serves and won 73 percent of those points while making only 20 unforced errors to 64 for Berdych.

“It was brutal,” Murray said. “Hard to describe. You had to focus for every single point. You had to get in position for every shot. You weren’t going for aces because it was hard enough to get the second serves in.

“Some of the hardest conditions I have ever played in, and I come from Scotland so that’s saying something.”

Murray and his coach, eight-time Grand Slam champion Ivan Lendl, are the only Open-era players to drop their first four Grand Slam finals, Murray losing at the 2008 US Open, 2010 and 2011 Australian Opens and last June at Wimbledon.