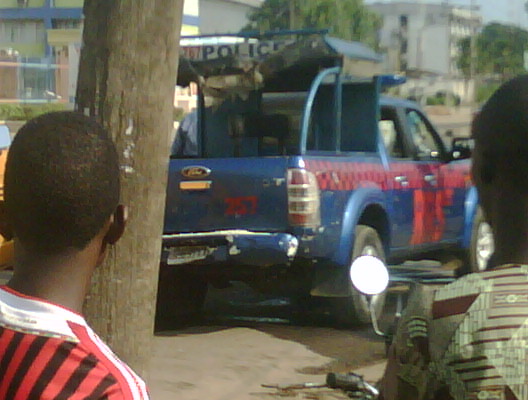 Cyriacus Izuekwe & Oluwole Adeboye
Armed robbers went on the rampage this afternoon in Lagos and killed several people including two policemen inside their patrol vehicle.

According to an eyewitness who gave his name as Tayo Adeyeri, the robbers, who drove in two SUVs, a Toyota Prado and Armada, stormed several parts of Lagos, including a bureau de change at Agege, Lagos, southwest Nigeria, where they shot some currency changers and carted away two bags containing local and foreign currencies running into millions.

Adeyeri said he saw four people who were shot dead and that the robbers also shot two currency changers who resisted their attack.

Those that were shot but survived were taken to Mayfair Hospital at Oke-Koto but they were rejected and were taken to Motolani Medical Centre at Alfa Nla, Oke-Koto, Agege for treatment.

Our reporter was not allowed into the hospital to speak with the victims.

A stray bullet shot by the robbers also hit a six-year old girl in the eye and her grandmother on the forehead while they were watching TV in their home at 15, Alfa-Nla, Agege.

A stray bullet also hit a parked Volvo ambulance with registratyion number HL 355 AAA belonging to Motolani Medical Centre, and shattered the back winshield.
The robbers numbering eight, including two women who were driving the the SUVs, started their operation at about 10:35 a.m. from Ifako-Gbagada, Oshodi, Mile 2 and Agege.

P.M.NEWS gathered that while they were escaping in their SUV, a team of Rapid Response Squad, RRS, chased them with their patrol vehicle with registration number 5251.

The police team caught up with the robbers at Guinness bus stop along Oba Akran Avenue in Ikeja and the robbers opened fire on the cops.

In the ensuing gun duel, the police patrol team driver and another policeman were killed on the spot and the robbers escaped with their loot.

When P.M.NEWS got to the scene a few minutes after the gun battle, the two dead policemen soaked in their blood were still lying in their Toyota patrol vehicle marked 525 on both sides of the vehicle.

The identities of the two policemen could not be ascertained as the RRS Commander, CSP Kayode Odumosu, declined to pick his call when our reporters contatcted him on pnoe this afternoon.

Two LASTMA officials had earlier been shot at Oshodi and a police officer was also shot at Ifako Gbagada, according to eyewitnesses.

The state Police Command spokesperson, Ngozi Braide, also did not speak on the incident when our reporter put a call across to her this afternoon.
There has been no official reaction at the time of this report.