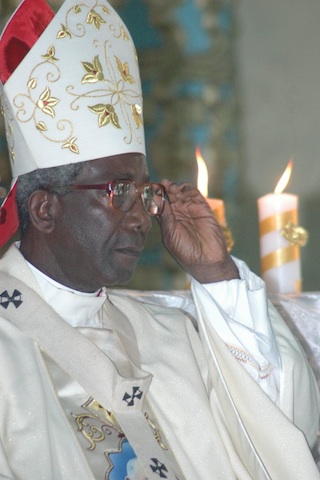 President Goodluck Jonathan on Sunday advised members of the Catholic Bishops Conference of Nigeria (CBCN) to continue to pray for peace, progress and unity of the country.

He gave the advice at the opening ceremony of the second plenary session of the conference, shortly after a Holy Mass at the Mater Dei Cathedral in Umuahia.

The President, who was represented by the Minister for Labour and Productivity, Chief Emeka Nwogu, underscored the need for the church and government to collaborate for the development of the country.

Jonathan expressed concern over the current religious bigotry, violence and hate among Nigerians at a time his administration was embarking on socio-economic transformation of the country.

He gave the assurance that the security problem in the country was being addressed, adding: “This administration stands for truth, justice and rule of law.’’

He restated the commitment of his administration to fighting corruption, saying all the institutions that were established to fight corruption had been strengthened.

He called on members of the conference to deliberate on matters concerning national peace and security as well as other issues that would help to move the nation forward.

Jonathan promised to continue to seek the face of God in steering the ship of the nation, adding that he was determined to leave a lasting legacy for posterity.

Eearlier, the president of conference, Most Rev. Ignatius Kaigama, reaffirmed the determination of the bishops to ‘’continue to inspire the Catholic faithful to live and work for one nation.

He said the current security challenges were designed “to create distrust, disharmony and disintegration’’.

“’We must collectively resist the temptation to pitch northern Nigeria against southern Nigeria, Muslims against Christians by the terrorist group.’’

He promised that as spiritual leaders, “we will continue to supplicate God for peace, reconciliation and justice in our beloved country.”

He condemned the ‘’reckless attacks on Christians and other innocent Nigerians’’ and demanded that the mayhem be brought to a halt.

”Most Nigerians wonder whether we really are on top of the situation as is often claimed,’’ he said.

The clergyman expressed sadness over what they referred to as the ‘’unbridled corruption’’ among the nation’s political class.

He described as worrisome the “mismanagement at all levels, especially the recent fuel subsidy and pension funds scam”.

“Nigeria is a rich country, but Nigerians are poor,’’ he said, adding: “A few Nigerians wallow in unbelievable wealth and spend what should be for all of us recklessly.’’

Also speaking, Papal Nuncio to Nigeria, Most Rev. Augustine Kasujja, called for urgent government action to end the state of insecurity in the country.

Kasujja said the spate of killings, violence and general insecurity was worrisome, and emphasised, the imperativeness of ecumenism and dialogue among the different religions in the country.

Gov. Theodore Orji of Abia and his Anambra and Imo counterparts, Peter Obi and Rochas Okorocha, delivered goodwill messages to the conference.

Orji said that ‘’politicians are not the most corrupt in Nigeria, so when you condemn the politicians, you should also condemn others’’.

Obi, however, acknowledged the allegation of massive corruption among the political class.

‘’We have talked a lot in Nigeria, it is time for Nigerians to start confronting us and our life style,’’ he said.

The governor noted the corrupt tendencies and unbridled quest by politicians to amass wealth at the expense of the people, regretting that “Nigeria is going down the drain’’.

He said that 123 private jets were recently registered in Nigeria, pointing out “’90 of these jets were purchased with stolen money’’.’

He described the domestic debt owed by various levels of government in the country as ‘’dangerous,’’ noting that the future of the country was being mortgaged.

‘’We borrow for consumption and not for manufacturing,’’ he said, adding that the nation’s currency would suffer devaluation ‘’if they cannot redeem the debt’’.

Okorocha admitted that the political leaders should be held responsible for the rot in the country, pointing out that the nation’s woes required spiritual intervention.

He called for a joint conference for both the clergy and politicians ‘’where we will rub minds together on how to move the country forward’’. (NAN)