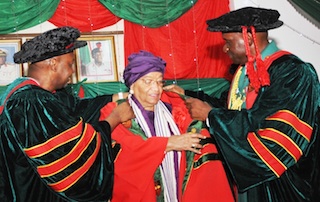 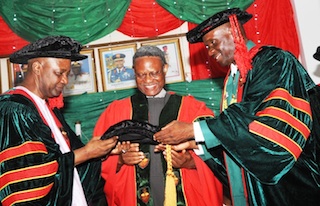 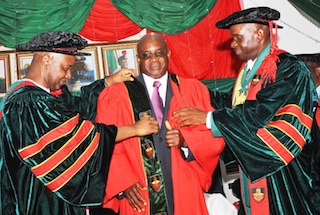 The 188 cadets of the 59 Regular Course passed out with first degrees in various disciplines, while 577 were conferred with postgraduate degrees during the convocation ceremony.

Earlier, President Goodluck Jonathan had called on the Nigerian Military, particularly the graduating cadets, to live up to their constitutional role of ensuring peace and security of the nation.

Represented by Vice President Namadi Sambo, Jonathan reminded the cadets that they had important roles to play in the administration’s transformation agenda.

Jonathan further urged them to strictly adhere to the rule of law and the constitution, by defending the nation’s territorial borders and assisting other sister security agencies in ensuring law and order in the country.

He commended the military for their efforts in ensuring internal security, through collaboration with other security agencies, and urged them not to relent in contributing to regional peacekeeping missions.

Meanwhile, the NDA said it had so far graduated 3,686 Regular Combatant Cadets since the commencement of the award of first degree in 1985.

A brief history of the degree programme presented at the graduation showed that the institution currently runs 16 degree programmes in the Departments of Economics and Management Science, Geography, History, International Studies, Languages, Political Science and Defence Studies, among others.

From inception of the degree programme to date, a total of 3,686 Regular Combatant Cadets have received NDA degrees in various fields, out of which, 38 made first class honours.

A summary of the first degrees conferred on the cadets of the 59 regular course indicates that there are 39 second class upper division, 109 second class lower division and 40 third class.

The President presented medals to the best Army, Air Force, Navy cadets and Short Service Course, as well as the Best Foreign Cadets, after a review of the military parade organised in his honour.