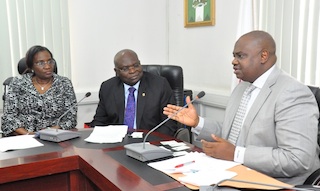 Chairman of the Economic and Financial Crimes Commission, EFCC, Mr. Ibrahim Lamorde, has decried some unethical practices in the banking sector that undermine both the economy and the Commission’s investigation activities.

He stated this today in Abuja , when officials of the Chartered Institute of Bankers of Nigeria , CIBN, led by its president and chairman of council, Mr. Segun Aina, OFR, paid him a courtesy visit.

Lamorde listed such unethical practices, which he said have negatively impacted on Nigeria ’s record in the fight against economic and financial crimes, to include the secrecy surrounding private banking, doctoring or non disclosure of true position of statement of accounts of suspicious account holders and non-compliance with Know-Your-Customer, KYC, principle.

He described as unfortunate, a situation where banks fail to disclose the identities of some people under investigation by the Commission. “If you send letter to the bank to avail you the details of such account, the reply you will get is that such account does not exist. If you insist, then you will be told that such records are not on the front desk, that it is only the managing director or the deputy managing director that manages the account, this is not a healthy banking development”, he declared.

Lamorde told the visiting bankers that the Commission appreciates the need for the banks to protect their customers, but warned that such should not be at the detriment of the society. “We want our society to be better. Nobody would want to be treated in an unfair manner outside the shores of this country just because he/she is carrying a green passport”, he said.

The anti-graft boss however commended the leadership of the Chartered Institute of Bankers of Nigeria for their role in helping to sanitize the banking sector culminating in appreciable increase in professionalism among its members. He however urged them not to rest on their oars. “It is in our own interest that the banking system continues to get better. Those who don’t have business being in the banking industry should go”, he said.

Earlier, Mr. Aina commended the EFCC chairman for the professional manner with which the EFCC under his leadership handles matters, adding that the institute believes that the Commission can do better.

Aina who said the visit was aimed at discussing areas of collaboration with the EFCC said that the Commission’s training Institute, the EFCC Academy , will provide a veritable platform for the exchange of knowledge between the CIBN and the EFCC. “We can train staff of the EFCC to be acquainted with new trends of banking and to better understand the workings of the banks which will help in the course of investigation of bank fraud”.

The CIBN president also urged the EFCC to take a second look at the enforcement of the Dishonour Cheque Offences Act. “The law is there, but people issue cheques and the cheques get bounced and nothing happens. We want to collaborate with the EFCC to ensure that the law is enforced”, he said.

On the issue of the secrecy associated with private banking, Mr. Aina said private banking is an arrangement where the banks gives special services to some customers who are not expected to join the queue in the banking hall, but pointed out that such accounts should not be shrouded in secrecy. “There is no reason why the account of such customers should be made secretive and not be made available to the EFCC upon request,” he said.