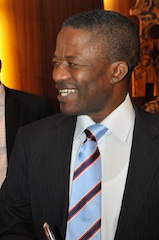 A Nigerian High Cour, based in the capital of Abuja on Thursday dismissed a suit filed by Emmanuel Ibe, against his employers, the Police Service Commission (PSC).

Ibe, a Deputy Director, Budget, and also the President of the commission’s Muti-Purpose Service, challenged the competence of the commission to set up a disciplinary committee to inquire into misconduct against him.

He alleged that PSC disciplinary committee breached his right to fair hearing as guaranteed by the constitution.

The PSC had alleged that Ibe collected various sums of money from some persons to effect their recruitment into the police as cadet inspectors.

Justice Husseini Baba-Yusuf in his judgment held that the panel set up by the PSC to look into allegation of misconduct against the applicant was in order.

He said that there was no law prohibiting the commission from constituting a panel of inquiring to look into issues of misconduct.

Baba-Yusuf also held that the allegation bordering on improper constitution of the disciplinary panel lacked merit as it had not been shown that the committee would not do justice as required by law.

He dismissed the claim of the applicant for want of merit.

Ibe had alleged that the composition of the panel had been compromised, therefore, its independence and impartiality could not be guaranteed.