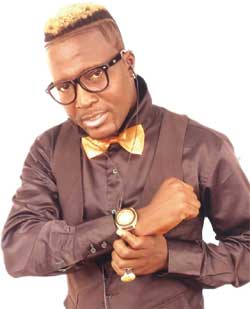 Episode 12 of The Big Friday Show sponsored by Globalcom, Nigeria’s telecommunications giant, has continued with multi-talented actor and presenter, Christopher Nii Attoh.  Chris Attoh, as he is popularly known, is the studio guest on the show which featured A-list duo, R2bees and Efya in Episode 10, after Nigerian celebrity acts had taken the centre stage in the first nine episodes.

He displayed his hosting prowess by helping the show’s regular host, Basketmouth, move the show in-between being interviewed and cracking jokes.

Although he says acting was not on his agenda, the multi-talented TV personality has steadily risen to stardom to become one of the finest promising actors in Africa. He first starred in Life and Living It, and followed with spectacular performance in Scorned and The Perfect Picture which broke Box Office records in Ghana.

Chris Attoh, answering questions, as to whether it was more lucrative to act in Nigeria or Ghana, said: “Nigeria is a bigger market but I will advise that you bargain right wherever you find yourself.”

The Tinsel star talked to viewers about his steady rise to fame, love for acting and hosting TV productions as well as his passion “to continuously strive to put Ghana’s name on the entertainment map worldwide.” Episode 12 also featured EBISAN as the upcoming artiste for the week. The multi-talented singer/songwriter talks about her debut single, Love Story and sophomore single, Jowo, among other things. The Big Friday show is hosted by popular Nigerian comedian, Basketmouth, and powered by Glo.