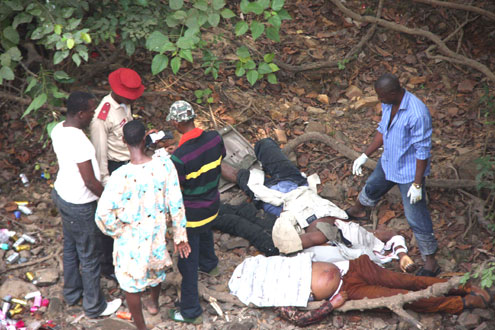 Scene of a tragic crash

Mr Osita Chidoka, the Corps Marshal of Nigeria’s Federal Road Safety Commission (FRSC), said on Saturday that road accidents are the biggest killers of Nigerians, more than any other disease. Although he did not provide statistics for a reality check and comparison with other killers, Chidoka said the frequency of accidents has become a great source of concern.

“No other disease is killing people in the country like road traffic accidents and this is a source of concern for all the stakeholders,’’ he said in Sokoto at a Special Marshals Sectoral Workshop, with the theme, “Advocacy as a tool for improved road safety activities’’.

Last year, 3,000 people, according to a contentious statistics given by the FRSC, died in Nigeria in 2,235 accidents, making Nigeria, the second country in the world with the highest fatalities on the roads. The World Health Organization and the National Union of Road Transport Workers all disputed last year’s figures. In earlier figures, FRSC reported deaths of 17,000 between 2007 and 2009.In comparison, 220,000 people were estimated to have died as a result of AIdS in 2010, according to the statistics provided by http://www.avert.org/africa-hiv-aids-statistics.htm.

In Sokoto, Chidoka said that 54 persons died in accidents in Sokoto, Kebbi and Zamfara between July and August this year.

Chidoka, who was represented by the Sokoto Zonal Commanding Officer of FRSC, Mr Alfred Adeboye, said 15 persons died during the Eid el-Fitr celebrations in August in Zamfara and Kebbi states. He did not state whether the country was set to outstrip its record last year.

“Twelve of them died in Tsafe, Zamfara. The deceased persons were all district heads from Jigawa State, who were on their way to Argungu, Kebbi State,’’ he said.

Chidoka said the zone, RS 10, came third nationwide in the ranking for accident rates during the period.

The Secretary to the Sokoto State Government, Alhaji Sahabi Gada, said the state government had given priority to road construction and rehabilitation, to ensure free flow of traffic .

‘’ The state government is committed to partnering and supporting the corps at all levels to facilitate its operations and further sanitise our roads ,’’ Gada said.

The state Sector Commander, Dr Aliyu Gummi, said ‘’our attitude to road traffic rules and regulations falls abysmally short of what is obtained in other countries, including Niger Republic, Ghana and Cameroon.

Alhaji Bello Gwiwa, the Permanent Secretary of the state Ministry of Education, who was the chairman of the occasion, urged Nigerians to regard road safety as a collective national duty .