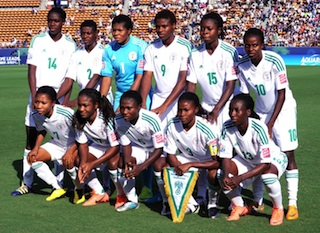 Nigeria’s President Goodluck Jonathan late Saturday announced cash rewards for the country’s Paralympians and female Under-20 footballers for their performances at the just-concluded games. He also announced the conferment of the national honor of Member of the Order of The Niger, MON, on the six gold medal winning Paralympians.

“You represented our country to the best of your ability, we thank you,” Jonathan told the Paralympians and footballers at a reception hosted for the two contingents.

The physically-challenged athletes won a total of 13 medals, including six gold at the London Paralympics, placing Nigeria 22nd on the medals table and third best in Africa after Tunisia and South Africa.

The female football team, the Falconets, battled to become world fourth best at the U-20 World Cup in Japan.

Jonathan announced the different cash gifts for the athletes at a reception held at the Banquet Hall of the Presidential Villa on Saturday night.

Team Nigeria contingent to the London Paralympics was made up of 29 athletes who participated in just four sports.

The President announced what he called a token cash gift of N1 million for each member of the Under 20 female football team popularly known as Falconets while noting that though they did not win the championship, they gave Nigeria good representation from the qualification stages and during the tournament.

The Coaches and other officials of the football team were awarded N1.2 million each by the President.

For the Paralympians, President Jonathan announced a cash gift of N500,000 each for non medalist in the team, while Bronze medal winners will receive N2 million each.

Silver and Gold medal winners were given cash award of N3 million and N5 million respectively while the coaches and officials of the Paralympian team will also receive N2.5 million each.

In addition the gold medal winners will also be conferred with national honour of MON at the National Award ceremony scheduled for Monday.

The President who lamented the poor performance of Nigeria’s team to the 2012 London Olympics who failed to win any medal said the situation must not be repeated.

The President therefore asked the private sector and each states of the federation to join in the battle to develop potential medal winners at the next Olympic for Nigeria. The President said he will soon convene a national retreat that will address critical issues in Nigeria Sports.

The retreat, he said will be attended by all the state governors, the private sector, sports administrators, current and past athletes and other relevant stakeholders. “At the end of the day, we will come up with policies and that will win us medals at the Brazil Olympics”, said Jonathan.

While speaking at the reception, Bolaji Abdullahi, the Minister of Sports attributed the success of Nigeria’s Paralympians to discipline and high sense of commitment.

Lack of these two qualities, he said was responsible for the failure of Nigeria Olympians to the 2012 London Games to win any medal. Bolaji noted that with the performance of the Paralympians, Nigeria is now number one country in powerlifting in the world. While promising that government will make good its promise of early preparation for the 2016 Brazil Olympics, Bolaji said Nigeria need to build a system that can produce medalists rather than scouting around athletes that can win medal.

Governor Rotimi Amaechi of Rivers State who spoke behalf of Nigeria Governors’ Forum said the nation is grateful to the Paralympians for their performance. He however emphasized that Nigeria can only do well at the Olympics if the athletes embark on early preparation for the games.

The Rivers State Governor also used the occasion to harp on the need for Nigeria to display more seriousness in the eradication of polio.
The reception for the Paralympians was attended by Vice President Namadi Sambo, state governors, Senate President David Mark, members of the National Assembly, Ministers and Sport administrators.

Members of the Under 20 female national team presented a jersey to the President in appreciation of his support to the team.

The award ceremony was also attended by the vice-president, ministers, state governors and other top government officials.

with additional reporting by AFP