Zimbabwe's Tsvangirai still finds a way to marry his love 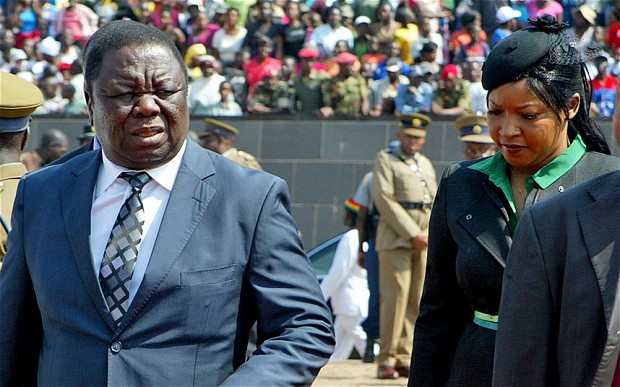 Zimbabwe’s Prime Minister Morgan Tsvangirai and his new fiancee held their wedding on Saturday despite a court order that cancelled his marriage licence after his ex-lover tried to block the union.

Tsvangirai, 60, dressed in a black suit and his bride Elizabeth Macheka, 35, in a white gown exchanged vows before hundreds of guests overlooking a flowing river at a Harare plush garden wedding venue.

The prime minister had originally planned his marriage under monogamous laws but decided to circumvent the court ban by staging the wedding under the country’s customary law which allows a man to have as many wives as he wants.

This was after his former lover Locardia Karimatsenga Tembo stormed the courts this week seeking to stop the marriage, claiming she was still married to him under customary laws.

It was Tembo’s second attempt to block the marriage after a high court earlier in the week threw out her case on grounds that she failed to prove she was the premier’s wife.

She then went to a lower court armed with video evidence of the traditional marriage ceremony where Tsvangirai’s emissaries were shown paying the bride price on his behalf.

A magistrate court granted her the order and an urgent appeal lodged by Tsvangirai early Saturday at the high court to overturn the magistrate’s ruling was dismissed.

He ended his union with Tembo last year, saying the relationship had been “irretrievably damaged” to the point where marriage had become “inconceivable”.

The magistrate court on Thursday dismissed a similar case by a South African woman who claimed the premier promised to marry her.

“Our celebration is a customary one… We still have to celebrate when the climate is clear,” said the Catholic priest who conducted the ceremony, after the couple exchanged rings. The two did not sign a marriage register.

A senior officer from Tsvangirai’s Movement for Democratic Change (MDC) party told AFP the “wedding .. is different from the one that was denied by the courts.”

Macheka is the daughter of a senior member of President Robert Mugabe’s ZANU-PF party which was forced into a compromise coalition government with Tsvangrai’s MDC after election chaos in 2008.

A pipe band from one of Harare’s top private schools played as Tsvangirai walked on a white carpet into the wedding ceremony, while a violinist played ‘here comes the bride” for Macheka.

A banquet reception was slated for the evening at Harare’s 25,000-seater Glamis Stadium.

Tsvangirai’s first wife of 31 years, Susan, was killed in a car accident in March 2009, just weeks after he went into a unity government with his long-time rival Mugabe following failed elections in 2008.