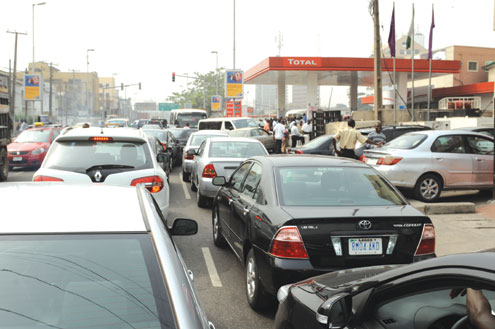 Scarcity of petrol has been reported in most parts of Lagos, as the Nigeria Ports Authority revealed the arrival of 12 ships laden with petrol.

Queues of vehicles resurfaced in many filling stations across the metropolis from yesterday evening.

Filling stations belonging to major and independent marketers are affected by the scarcity, with fuel hawkers now selling 10 litres of the product at N2, 500.

Some few stations selling petrol were selling at N110 per litre.

Some stations were asking motorists to pay N200 before dispensing to them.

Mr Akeem Alimi, a civil servant, complained about the long queue he joined at a petrol station before he got some.

“We have heard from the NNPC that Lagos has enough petrol to go round. Is it the operators that are hoarding the product and causing the scarcity? We heard that the scarcity of petrol in Abuja, Ibadan, Abeokuta and Port-Harcourt will not happen in Lagos, but see this development“ he said.

Mr Isiaka Yahaya, Auditor General of the Sahara Unit of Petroleum Tanker Drivers (PTD), said that petrol scarcity might linger in Lagos for some time.

He claimed that inability of marketers to import the product caused of current scarcity and that one depot in Apapa was loading fuel trucks with petrol.

Yahaya said that the marketers could not import petrol because of government’s failure to settle subsidy claims of some marketers.

“Out of the more than 10 depots in the area, only one was loading trucks and the loading capacity is going down on daily basis.

Dr Omar Farouk, General Manager, (Public Affairs) in NNPC, however, said that the country had sufficient petrol for her domestic use.

In a telephone interview with NAN, Farouk said that PPMC had assured Nigerians that the country had ample stock of the product.

“PPMC has said that it has sufficient petrol to take care of the country and had asked motorists not to indulge in `panic buying. The major challenge confronting them now is distribution to all states of the federation.

“There is sufficient petrol that will last the country for weeks. There is no need for panic buying. More vessels are berthing at the Port to discharge the product as we speak, ‘’ he said.

Meanwhile, the NPA said twelve ships are waiting to discharge petrol at various oil terminals within the Lagos ports.

This was disclosed by the `Shipping Position’, a daily publication of NPA made available to newsmen on Monday in Lagos.

The document reported that five other ships were waiting to discharge bulk wheat, general cargoes and rice.

It indicated that 19 ships were also discharging fish, rice, base oil, bulk wheat and fertiliser.

The document reported that 75 ships carrying different cargoes would sail into the ports between Sept. 17 and Oct. 4.

It also said that that nine of the expected ships would arrive with petroleum products.

The News Agency of Nigeria (NAN) reports that a breakdown showed that 35 ships would arrive in Lagos ports this week.