Adenuga, others honored by Nigeria 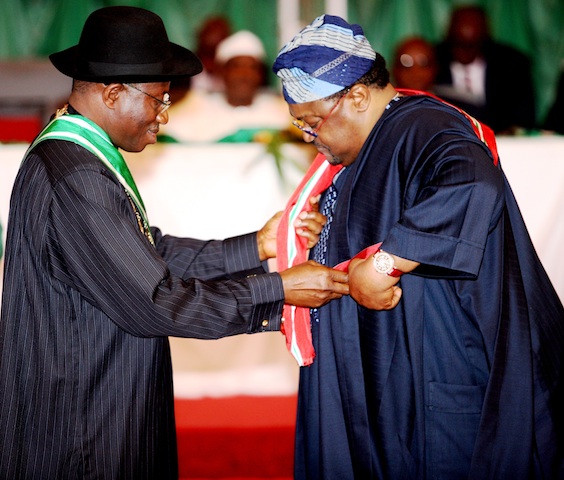 The telecoms and oil mogul was one of the 155 Nigerians and friends of Nigeria to be conferred with the award at a ceremony that is still going as at the time of filing in this story.

Mike Adenuga was honoured for his exploits in the area of business which have also led to the employment of thousands of Nigerians.

Also honoured at the ceremony being held under very tight security is Brigadier General Mobolaji Johnson, the first Governor of Lagos State and Tony Elumelu, former GMD of UBA plc and some justices of the Supreme Court.

Speaking before the commencement of the ceremony, Senator Anyim Plus Anyim, the Secretary to the Federal Government of Nigeria, SGF said nominees for the award were screened by the Committee saddled with the task and President Goodluck Jonathan.

The President consequently said he has directed the Committee in charge of organization of the award to compile a list of persons conferred with national honours whose current credibility is questionable.

According to him, national honour will be withdrawn from any of the honorees found no longer worthy of it at the end of the exercise. The President said this move is necessary to maintain the integrity of the National Honour award.

Some of the past recipients of the award who have been found guilty of corruption include the former Chief Executive Officer of the defunct Oceanic Bank, Mrs. Cecelia Ibru, former Inspector General of Police, Tafa Balogun, Lucky Igbinedion, the former Governor of Edo State among others. President Jonathan also asked 2012 honourees to sustain performance because they provide hope for the future generation who look up to them as role models.

Chief among the recipients of this year’s awards was Otunba Mike Adenuga, Chairman of Globalcom and Conoil, a leading operator in the upstream and downstream sector of the petroleum industry who was conferred with the second highest honour of Grand Commander of the Order of the Niger,GCON.

The President also picked out for commendation in his speech Mohammed Zakari, a staff of the office of the Accountant General of the Federation, who was honoured for returning the sum N6 million overpayment made to him at a bank.

In all, 11 Nigerians, including six Supreme Court judges were decorated with Commander of the Federal Republic,CFR while 25 distinguished Nigerians received the award of Commander of the Order of Niger (CON) – the recipient included state governors, senators, ministers and accomplished bankers.

The six athletes, who won gold medal in the just concluded London 2012 Paralympics, were each conferred with the Member of the Order of Niger, MON award. President Jonathan asked the Paralympians to see the honour conferred on them as a call to greater responsibility.