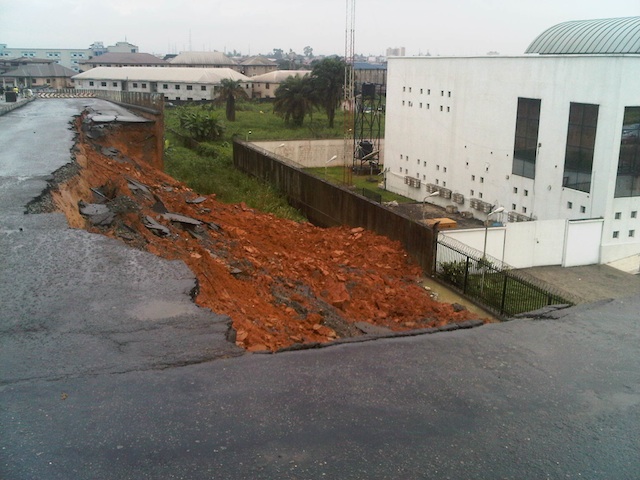 Motorists in the Nigerian oil-rich city of Port Harcourt,the Rivers State capital, were this morning trapped in gridlock caused by the sudden collapse of a section of the retaining wall of the popular Airforce bridge,that serves as a link to the Trans-Amadi Industrial area,the commercial hub of the City.

Governor Chibuike Amaechi’s government has expressed regrets that there are no records of any contractual or legal agreement to prosecute Bulletine Nigeria Limited that constructed the bridge.

In a joint press briefing by the Commissioners for Works,Victor Giadom,Commissioner for Transport,George Tolufari, and Commissioner for Information and Communications,Mrs. Ibim Semenitari,Giadom revealed that the construction of bridge was not supervised by the Ministry of Works but by “A Special Projects Bureau” directly in the Governor’s office under Odili’s administration.

The Rivers State Government this morning closed to traffic, all roads linking the bridge area.

The ill-fated bridge was built by the former Governor,Dr Peter Odili and commissioned twice by former President Olusegun Obasanjo in 2006.

Giadom said the bridge was supposed to have a-20-year life span from the year it was commissioned for use.

Before the collapse, the bridge had shown signs of defect, which necessitated some remedial work on it and a partial closure of a section.

However,the government said that it had to cordon off the ill-fated bridge for safety reasons pending when proper repair work would be carried out.