DJ Stabbed Over Plate Of Noodles 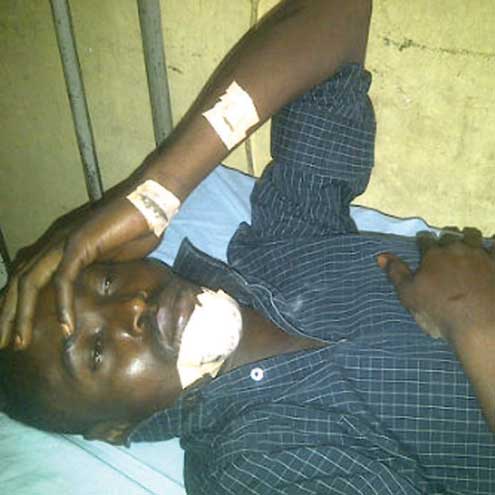 On the day of the incident, Skalley was said to have invited Kelvin to an event at Somolu area of Lagos State, and on their way back, the two friends in company of two other ladies stopped at Fela’s Shrine where they bought plates of noodles before proceeding to Oke-Aro in Ogun State.

P.M.NEWSEntertainment gathered that when they got to a studio at Oke-Aro, Skalley accused Kelvin of eating his food, an accusation the latter denied.

Angered by the denial, Skalley was said to have slapped Kelvin. He was also said to have taken a knife from his pocket and stabbed Kelvin on the head and jaw before taking to his heels. Kelvin, who was said to have bled profusely, was rushed to Zarabiz Hospital, Alagbado, where he was treated.

The case was reported at Agbado Crossing Police Station,  and Skalley was arrested the following morning.

A statement issued by James reads; “There was no time Skalley did such an act as reported. He is a law abiding citizen and also a very jovial person. However, there is no doubt about Skalley being aware of the incident, but he was not the one who stabbed Kelvin as was reported. A mutual friend of both Skalley and Kelvin known as Walex was the culprit of the act.

“This was also confirmed by statements taken by police from Kelvin, Skalley and T Blaze, in whose studio the ugly incident happened that day at Agbado area of Lagos.”