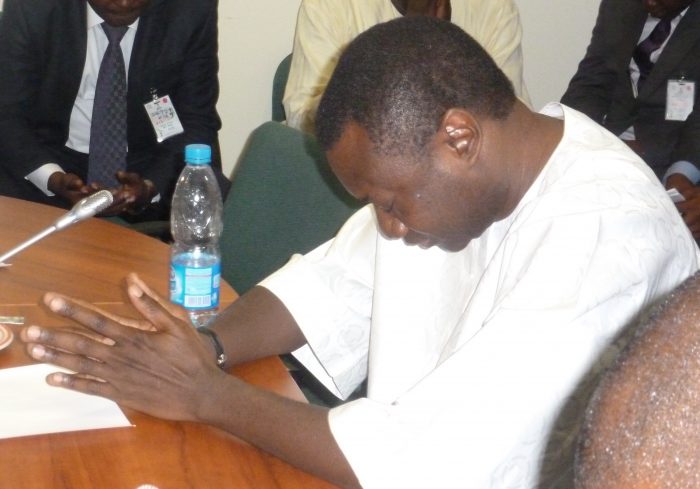 Femi Otedola no longer on the list of African billionaires

With a humongous loan portfolio of $1.2 billion, Femi Otedola, President Goodluck Jonathan’s business friend is the biggest danger to Nigeria’s banking system. And the Central bank of Nigeria has warned banks to steer clear of him and his business. He is toxic, the CBN seemed to say in a statement.

The $1.2 billion(N192 billion) is owed by Otedola’s Zenon Petroleum & Gas Ltd, with the debt passed on to Asset Management Company of Nigeria, set up to mop up toxic debts from the bank’s books.

The Central Bank has also barred the nation’s top two airlines from receiving any additional loans over their massive outstanding debts. Two state governments, Cross Rivers and Zamfara are also in the black book.

Arik Air Ltd., the nation’s top carrier which indefinitely halted its domestic flights Thursday claiming that the nation’s aviation minister wanted to destroy the company for her personal profit, owes the state-run Asset Management Corp. of Nigeria more than $534 million, according to information released by the Central Bank.

Aero Contractors Co. of Nigeria Ltd., the airline of choice for many of the foreign oil companies working in Nigeria, owes more than $203 million to the state-run company, according to the Central Bank.

Ugo A. Okoroafor, the Central Bank spokesman, told The Associated Press on Friday any bank that gave companies or individuals on the list loans would face serious fines from the government. While acknowledging the struggles of the airline industry, the spokesman said the bank could not allow massive debts to pile up on the nation’s banks and threaten the financial market.

Simon Tumba, a spokesman for Aero Contractors, declined to immediately comment Friday. Arik Air spokesman Adebanji Ola said the airline “was not in receipt of that particular” order by the Central Bank and declined to comment further.

The list of bad debtors barred from bank loans, first published in the Friday edition of ThisDay newspaper, also includes other top members of Nigeria’s business elite, who regularly have access to and patronage of top politicians in the oil-rich nation.

The CBN circular titled Prohibition of New Credit Facilities To Debtors of the Asset Management Corporation of Nigeria (AMCON), said the exposure has to be made as the debtors “failed to repay their loans to banks and had those loans subsequently transferred to AMCON.”

“In the initial instance, this restrictions shall apply to individuals, organisations, companies as well as principal shareholders and directors of companies where the outstanding value of loans purchased by AMCON amounted to N5 billion or above as at the day of purchase, without regard to the actual amount paid by AMCON,” the circular, signed by CBN’s Director, Banking Supervision, Mrs. A. O. Martins, stated.

“Deposit Money Banks are prohibited from approving or disbursing any new credit facilities to all persons and organisations on this list with effect of the date of this circular, until full liquidation of agreed indebtedness to AMCON,” the circular added.

Commercial banks were also prohibited from granting further credit to Cross River State and Zamfara State owing to the refusal of the Tinapa Business Resort and the accountant general of the Zanfara State Ministry of Finance to pay back their respective loans.

As proof of its determination to ensure compliance, CBN warned that “any DMB that is in breach of these guidelines shall be required to make an immediate provision of 100 per cent of total principal and interest outstanding in the account of the customer and related parties, in addition to whatever regulatory penalties the Central Bank of Nigeria may decide to impose.”