Jonathan calls for world order based on rule of law 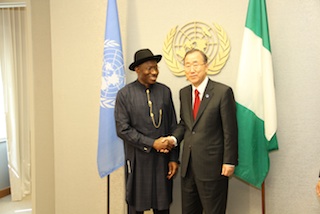 President Goodluck Ebele Jonathan Monday in New York assured the global community of his administration’s “unwavering commitment” to upholding the rule of law and implementing all pledges made by Nigeria to the international community.

Addressing the first-ever high-Level Plenary Session of the United Nations on the Rule of Law, President Jonathan declared that it was imperative for the rule to be further strengthened at national and international levels to ensure equity and fairness for all people.

The President said that the rule of law at international level must be based on the core principles of the United Nations which were further reaffirmed in the 2005 World Summit Document.

“Nigeria subscribes to the view that it is only an international system based on the rule of law that can guarantee the protection of the rights of individuals and the interests of the less powerful in the global arena.

“Member States should therefore continue to provide support for these international adjudicatory mechanisms to enable them discharge their respective mandates, President Jonathan told the high-level assembly.

The President said that his Administration recognised the close nexus between the Rule of Law and Democracy and the primacy of the rule of law as a prerequisite for the promotion and protection of democracy, good governance and sustainable development and therefore envisions the promotion of the rule of law at the international level as a vital means of strengthening cooperation and promoting enduring peace and security among nations.

President Jonathan said that his Administration will, consequently, continue to encourage the Nigerian judiciary to play a pivotal role in the advancement and elaboration of the rights of Nigerians through effective oversight over the actions of the executive and legislature.