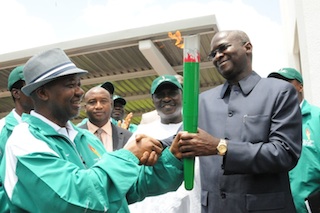 At the event held at the Aso Rock Presidential Villa, Bolaji Abudullahi, the Minister of Sports presented the festival torch, which symbolises the unity and friendship to the Vice President who passed it on to the host Governor of the 18th edition, Babatunde Raji Fashola. Sambo challenged the Lagos State government to match the record set by Rivers State last year by organizing a very successful festival.

The Vice President congratulated Governor Rotimi Amaechi whose state hosted the last edition of the festival for successfully hosting the games. Governor Fashola however promised that Lagos would stage a championship befitting of the very proud heritage and history of the National Sports Festival that will also meet the objectives of the festival of bringing Nigerians together, and development of talent.

He added that all hands are on deck to meet the timeline set by the organising committee.

Governor Fashola also commended the people and government of Rivers State for the successful hosting of the 17th edition of the competition which he said posed a challenge to Lagos to put up a good show at Eko 2012 games.

Those present at the occasion include Chief of Staff to the President, Chief Mike Ogiadomhe; the Deputy Chief of Staff, Alhaji M. K. Abubakar, and the Chairman of the Main Organising Committee (MOC) for ‘Eko 2012 and Director General of the National Sports Commission, Dr. Patrick Ekeji. Also present were Bolaji Ojo-Oba, Mallam Alhassan Yakmut, the Secretary of the MOC, Mallam Abba Yola and other top government officials.