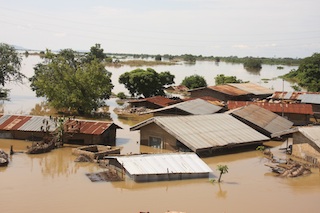 With no end in sight to the ravaging flood which has rendered thousands homeless in at least 20 States across the country, the Nigerian Senate on Tuesday passed a resolution asking President Jonathan to urgently send a supplementary budget to the National Assembly to make cash available for succor of the victims of the natural disaster.

The decision of the upper chamber of the National Assembly followed a motion on the flood menace moved by Senator Danladi Sankara.

The Senator had drawn the attention of his colleagues to loss of lives, homes and properties to unrelenting floodwater ravaging some parts of the country.

Lawmakers who spoke on the issue noted that National Emergency Management Agency (NEMA) is overstretched and ill-equipped to manage the flood.

Senate President David Mark however said it is unfortunate that despite warnings about the impending flood by the weather monitoring agencies, many States failed to adequately prepare for it.

Apart from asking President Jonathan to forward a supplementary budget to the National Assembly to address the immediate needs of the victims affected by the flood across the country, the lawmakers also urged the federal government to draw up a national standard operating procedure to respond to such disasters in the future.

President Goodluck Jonathan will present the 2013 Appropriation Bill to the joint session of the National Assembly on October 4.

In a memorandum to Senate President David Mark on Tuesday, entitled “Re: 2013 Budget,” the President asked to be granted a slot of 12.00 noon on Thursday, October 4th, 2012 to enable him formally address a joint session of the National Assembly on the 2013 Budget.